This is a ‘thinly disguised’ account of the prison life of Soledad Brother George Jackson, part of which takes in his romance with activist Angela Davis. It’s an unheralded ’70s prison movie that deserves more heralding, even if it loses a bit of momentum once prisoner and professor meet and start cheesily narrating their letters to each other accompanied by a laid-back R&B soundtrack.

Bernie Casey is cast in the George Jackson role, as David Thomas. David is a passenger in a car when the driver, a friend, pulls into a gas station and robs it; neither he nor the other passenger has any idea about what is about to go down. He is nonetheless arrested, charged, and cops 1 year to life, and is sent to the Lincoln City Prison.

In prison he encounters unrelenting, entrenched racism; one year quickly becomes three. His teenaged brother, Josh (Owen Pace), goes to see Professor Paula Jones (Vonetta McGee in the Angela Davis role), to see if she can do anything to bring attention to the plight of African-Americans in prison. He tells her that his brother has been denied parole and is being moved to ‘Mendocino State Prison’ (standing in for San Quentin and Soledad, rolled into one, and described by Josh as “the number one concentration camp for blacks”). “Well, did he get into trouble inside?” Paula asks him. “All blacks get into trouble inside,” Josh tells her.

David is a brooding character whose anger is never far from the surface, and it’s not helped by the prejudice to which he is exposed. At Mendocino he is introduced to the writings of Malcolm X and Marxist-Leninist theory by his cellmate, Walter Nance (Ron O’Neal in the part of WL Nolen, with whom Jackson founded the Black Guerrilla Family), and his inner activist is awakened. They play chess to signify the shift from the corporeal to the cerebral. David is soon urging revolutionary action and making himself a target of the racist white prisoners and the guards. He sits in the front row seat at a film night – a row customarily occupied by whites. An all-in brawl ensues; Thomas gets set upon, bashed, and sent to the hole. Walter is sent there with him; when he objects to his treatment and the racism of the guards, he is beaten so badly, he dies. ‘Suicide,’ is the official explanation.

David starts writing an underground newsletter; it circulates around the prison and is smuggled out by his brother. It’s also cleverly brought to the attention of an African-American senator and Paula, during an official visit to the prison (in which Jones first meets David as she passes his cell). The newsletter is the cause of great embarrassment to the prison, and particularly the ambitious and bigoted Head Guard McGee (John Lehne); the whole prison is turned upside down and Thomas and his new cellmate, Lewis (Renny Roker), suspected of being behind the political activity, wind up in shackles.

In response to complaints about not getting yard access, the African-American prisoners are placed out in the yard with the whites, from whom they are normally segregated during exercise; the predictable fight with the #1 racist white prisoner is broken up by a tower guard fatally shooting the unarmed Lewis. When a grand jury determines that the shooting was ‘justifiable homicide’ and not murder, tensions amongst the African-Americans rise, just a little. A white guard is tipped over a bannister on an upper tier and dies. David and two others are charged with his murder, without any real evidence. Meanwhile, the budding romance between David and Paula, who has continued to visit him, causes him to lose all capacity to speak (to her, at least) in anything but soporific tones.

Things get worse. Josh, responding imprudently to yet another racist incident involving his brother in court, takes the DA and the judge hostage, and all three wind up dead as he tries to escape. The gun used by him is quickly traced back to Paula, who had just purchased it. She promptly goes underground, and makes it as a fugitive onto the FBI’s ’10 Most Wanted’ list before, months later, being arrested and jailed, awaiting trial for conspiracy and murder. Two young white prisoners, railroaded by McGee into making false eyewitness statements against David and the others, decide to renege on the deal. McGee, in desperation, recruits another black prisoner, Horton, to take prisoner hostages (including David) with two guns… in the hope that David and others might be able to be shot by tower guards in the process of an ‘escape attempt’ or by armed guards ostensibly trying to rescue the hostages. David is the first to see the set-up, wrests the guns from Horton and seizes two guards as hostages, one of whom is mistakenly shot by McGee, who is in turn shot and killed by David, who is in turn shot and killed.

That seems to be enough. The white prisoners, acknowledging that the treatment of the black prisoners has finally gone beyond the pale, start mixing with them. Within weeks, David is posthumously acquitted of his murder charge, and Paula is acquitted of hers.

Brothers is a fine, gritty ’70s prison flick – until it slightly loses its way. Filmed at the North Dakota State Penitentiary, it has an authentic feel and deftly conveys both the mood of the times and those elements of the system that George Jackson was attempting to overthrow. But it doesn’t seem to know quite how to deal with the relationship between David and Paula, and the choices about what parts of Jackson’s story to portray accurately are a little bewildering. So heavily do the plot and structure of the film rely on the Jackson-Davis story, the departures away from real-life events – such as Jackson’s brother Jonathan freeing three prisoners and taking three jurors hostage (in addition to the the judge and Deputy DA), and Jackson taking a guard hostage with a smuggled gun and freeing other prisoners in the final, abortive escape attempt – are hard to understand; the rewriting of those incidents undeniably cast Josh and David in a better light (and add martyrdom to David’s list of achievements), but undermine the credibility of the account. With so many parallels, this can never be a film based around haphazardly-selected aspects of George Jackson’s life, with odd intersections between the fictional David Thomas and the true story. And the real Jackson story is extraordinary enough to be recounted without the sugar coating. 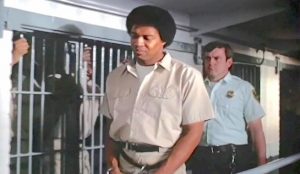 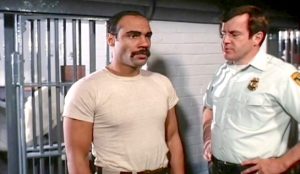 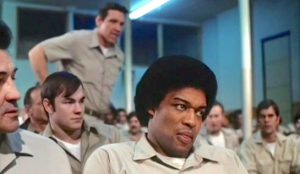 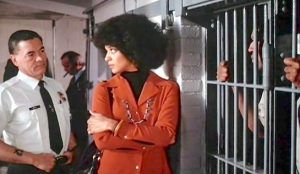 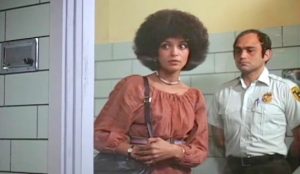 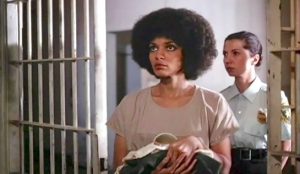