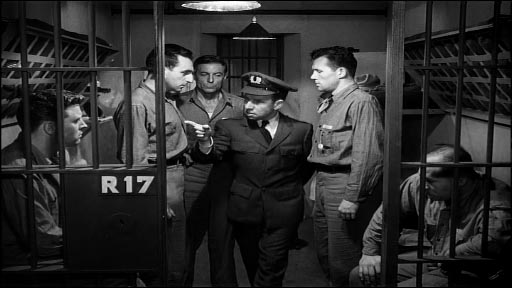 This is exactly what you’d expect a hard-hitting prison melodrama in 1947 to be like.  Although it comes from a very different era, there are some familiar themes, including a heated debate by administrators about whether prisoners are getting it too soft. There is even a number-plate industry (more 14 Gang in Pentridge than Ararat). And there is the unfamiliar, too, such as the population in a post-War US prison being entirely white, save for one prisoner named Calypso who is inclined to break conversationally into song.

At the centre of the real drama are tough guy Joe Collins (a young Burt Lancaster), desperate to escape to see his wheelchair-bound loved one who has cancer and doesn’t know he is in jail and won’t have a potentially life-saving operation without him by her side; and his nemesis, Captain Munsey (Hume Cronyn), an ambitious, ruthless, mind-games expert who rules the prison, filling the leadership void left by the well-meaning but ineffectual warden. Unfortunately, Cronyn has a touch of the Don Adamses about him (particularly in a peaked cap), and at times it looks as though Agent 86 is dispensing justice in a really menacing way. Munsey is far from imposing physically, but maintains control through terrorising weak prisoners to inform on their colleagues – after which he is not particularly fussed about what the rest of the prisoners do with them. Collins dramatically receives an obscure tip-off about how to escape from an ailing prisoner who caught the dying words of Collins’s cellmate. Fortuitously, a gun and petrol bombs appear out of nowhere to help Collins and some newly disaffected allies make an assault on the prison’s security, just as the warden is deposed in favour of the tougher and despised Munsey.

The jail’s (and the film’s) conscience is its alcoholic doctor, who is the one coherent voice against the ‘get tougher’ push, and it is he who tips Collins off that Munsey knows of his escape plot and is lying in wait. Collins, desperate as he is to see his cancer-ridden girl, won’t be deterred and tries to pull the escape off anyway.  It fails, bloodily, but not in the manner expected, leaving the good doctor to have some final portentous words to the camera: “Nobody escapes.  Nobody ever really escapes.”

Surely some people escape, even if it’s once they’ve completed their sentence, Doc!  You can tell it’s a very deep film. 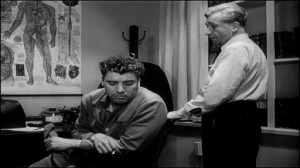 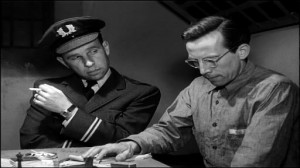