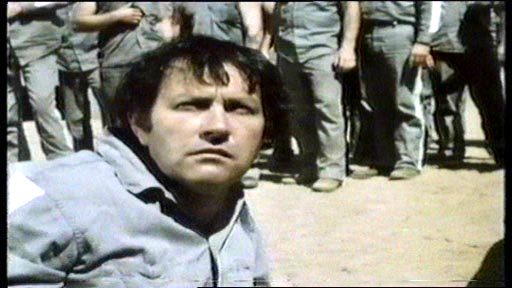 Also known as ‘Seabo‘, this Earl Owensby vehicle is set in North Carolina in 1957. Owensby produced the film, and is also cast in the lead role as Seabo, a Native American ‘halfbreed’ who is a tracker, bounty hunter and a wronged and supposedly enigmatic prisoner. Owensby, it seems, appeared in 11 films as an actor… and produced every one. If that doesn’t tell you something, nothing will.

Buckstone County Prison Farm leaks like a sieve… but it’s quite a dangerous sieve; guards are rather-too-frequently killed in the line of duty. When we meet Seabo the Sheriff is seeking his help to track down two escaped convicts, the older of whom had left a guard dead in the process. Seabo finds them just as the older man is attempting to rape a young African American hostage. He frees the woman but the desperate would-be rapist comes at him, and Seabo shoots him. The father of the young woman then shoots the surrendering younger escapee. In the back.

Seabo takes responsibility for both shootings, but no charges are laid over either of them. He does, however, have a reputation around town as a ‘communist traitor’ and the cowardly Sheriff’s deputy doesn’t like him; the deputy goads him and then arrests him for assault. Seabo heads out to the Buckstone County Prison Farm.

Now, you’d think that his record of bounty hunting and killing escaped convicts (including one, reportedly, by shooting him in the back) might make him unpopular with the other prisoners, and it does. But you’d also think that the Warden and his guards might be pleased with him for tracking down and shooting the man who killed one of their own. Not so. The Warden, Luke Coley (who resembles Strother Martin’s Captain in Cool Hand Luke rather too closely – in fact, much of the film is a bit too reminiscent of the 1967 classic) hates Seabo with a passion and has him brutalised and beaten. It’s only late in the movie that we discover that Coley’s son ignored Seabo’s reconnoiter advice years earlier in Korea… and got himself and his whole patrol killed; Coley can’t accept that his son was at fault… hence the commo tag.

When six more prisoners escape, leaving another guard dead in their wake, Seabo is again called upon to track them down. He and another outsider, the stuttering Zack (Leonard Dixon), are given temporary release. Seabo duly captures (or shoots) them all, but on returning to the prison he suspects that he is being set up; when the Warden’s hired help start firing upon the party, Seabo miraculously avoids the carnage and disappears into thin North Carolinian air, never to be seen again. Spooky.

Buckstone County Prison is not one of the better prison movies. Much of the acting is woeful. Owensby plays a strong, silent type but his silence is nowhere near enough to mask the palpable limitations of his acting ability; his intended stoicism comes across merely as woodenness. The warden and the baddest and meanest of his guards, Mr Jimbo (karate king and Elvis bodyguard Ed Parker), are little more than cartoon characters.  If you were unsure whether the rampantly abusive treatment of prisoners made the prison corrupt, four carloads of prostitutes turn up to provide services for the men (with Jimbo taking his cut) just to make it clear.

But it does have a great soundtrack. 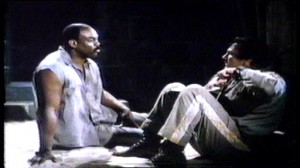 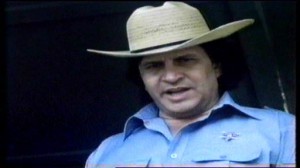