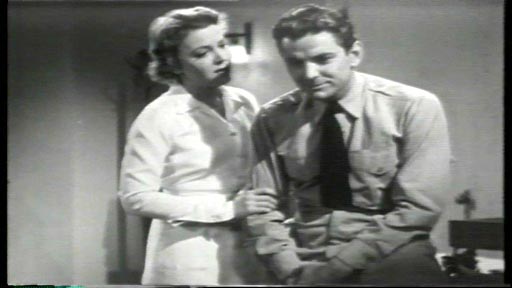 They don’t get any more melodramatic than this. Thankfully.

Warden Jim Henderson is trying to run a prison, but the prison nurse, Joan (Beverly Roberts), is proving an awful distraction. The doctor is in love with her, and has proposed nine times. Ira the Chaplain is secretly in love with her. Although she doesn’t know it, Ernie the executioner, who is sick of executing, only stays in the job so that he can be near her. Only the decent, fair-minded Warden appears immune to her charms.

One night, after a hard day’s executing, Ernie heads off to a bar to drown his considerable sorrows and to forget what he’s just done. Later that night, on the way back from dropping the Doc off to start his holidays, Joan asks Johnny Martin (Robert Wilcox), the Warden’s trusted prisoner driver, to stop off at the bar to rescue Ernie from drinking himself into trouble. Too late; Ernie has got into a bar-room fight with the local newspaperman and his cronies. Johnny rescues him from the fight, and then collapses while driving them back with a wound to his neck. No worries; the seriously drunken Ernie takes over the driving and they get Johnny some medical attention. While being nursed back to health, Johnny also professes his love for Joan… and this time, it is requited. Joan is smitten.

But things start going bad for Johnny. The newspaperman falsely accuses him of being drunk when he intervened in the fracas, and his imminent release on parole becomes politically untenable. Despite the Warden’s earnest pleas on his behalf, Johnny gets knocked back on his parole at a very strange hearing at which the newspaperman is invited to give evidence. After a moment or two of anger and a few misunderstandings, Johnny is convinced by Joan to cool his heels and look forward to the time they can be together.

His calm is short-lived. When he goes back to his cell, his low-functioning cellmate, Big Billy, impulsively attacks two guards, killing one. Johnny tries to pull him off the second one and then chases after him when he runs away. Presuming that they are trying to escape, guards fire upon them both, killing Big Billy and injuring Johnny. Oh dear. More trouble.

Johnny is tried for the murder of the guard, condemned by evidence from one of the other inmates in the cell-block, who hates him. He is taken to the electric chair, with the prisoner witness invited to watch. After Ernie reluctantly flicks the switch, the prisoner tells all and sundry that they just sent an innocent man to his death. Who should then appear but Johnny… the ‘execution’ was all a set-up. Johnny gets a pardon and goes off to live happily ever after with Joan.

We tend to think of the pre-war years being unenlightened. But here we have a nurse falling in love with a prisoner, with everyone’s blessing… and shows of extraordinary magnaminity on the part of Johnny’s rival suitors. As in Prison Nurse (1938), no-one seems to mind when a prisoner who may have killed a guard is left alone with a female nurse who would seem to have over-stepped a professional boundary or two. And we have a warden so convinced of a prisoner’s good character that he is prepared to pull a stunt at a public execution to prove the man’s innocence. A different time, obviously.