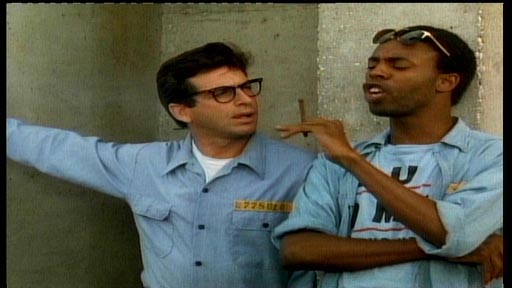 “From the creator of Police Academy“, trumpets the blurb on my DVD. I’m not sure if it’s true (the DVD cover manages to get every other detail wrong, including all the names of the film’s characters), but – sadly – it might as well be.

Robert Carradine is the movie’s main man. He pretty much reprises his character from the Revenge of the Nerds series, playing Herbie Altman, a junior executive in a stockbroking firm sent to prison after being framed to cover up his boss’s illegal financial activities – a plot-line later picked up by Pros & Cons (1999) with a similar lack of imagination and wit. So traumatised is he by his trial and conviction, Herbie develops an allergic reaction to the word ‘invest’.

His cellmate is ‘Sly’ Swann (Michael Winslow, funny-noise-making remnant of the 217 Police Academy movies). Sly runs all the rorts in the prison, but a single betting mishap sees him suddenly owing $25,000 to a number of other prisoners and guards. Herbie decides to raise the money to get his buddy out of trouble, and encourages the other prisoners (and a staff member or two) to stump up enough money to start playing the stock-market.

At the same time Herbie courageously locks horns with the prison’s corrupt Warden (Malcolm McDowell), who has a habit of addressing his charges with “Hello, scum!”, but is delighted to have a high-flier like Herbie (13 years and a $200 million fine) in his prison; à la Warden Norton in Shawshank, he is keen for some insider investment advice to make the most of the money he skims off the prison budget. Herbie’s bravery (and the promise of making everyone rich) quickly elevates him from nerdy new fish to leader of the pack.

After some initial difficulties getting his fellow prisoners not to over-react to fluctuations in the market,  Herbie soon has the whole prison reading the Wall Street Journal and keeping an eye on the Dow Jones. Under his guidance, the prisoners organise themselves as Con Inc, which promptly becomes a multi-million dollar enterprise with diverse interests. Thugs and hoods become brokers, business strategists and captains of industry, and the prison is transformed (using funds independently generated by the company) with hidden banks of computers, an electronic stock ticker-tape, a bar and nightclub (complete with girls), a resort-style visits area, and telephones and computers in the prisoners’ cells… all, somehow, without the Warden noticing.

With the Warden finally on the verge of discovering what’s happening in his prison, Herbie pulls off a big sting in which both the Warden and his former boss who framed him are exposed and get their comeuppance. Hooray! Within no time, all (well, nearly all) of the prisoners, duly reformed, start legitimate careers in their new brokerage firm on the outside. The message: with proper encouragement, all prisoners are capable of wearing suits and dabbling in futures markets.

The plot adheres to a tried and true movie formula: a motley crew of heroes pitted against  nasty and powerful adversaries… and, of course, overcoming all challenges. The crew here includes nearly all of your standard prisoner characters – the kufi-wearing leader and his massive bodyguard, a couple of muscle-bound, excitable enforcers, the smooth-talking Mr Fixit… and a man with a split personality whose antics (switching between characters and fighting with himself) are given way, way more screen-time than they deserve. Only the prison transvestite is missing.

And there is, of course, a compulsory female love interest in the form of prison psychologist Dr Ellen Scott (Lise Cutter), who is diametrically opposed to the Warden’s hard-line approach, and who acts as go-between in Con Inc’s dealings with the outside world – and inevitably falls in love with Herbie.

The film doesn’t work on two levels: (a) it isn’t funny, and (b) the prospect of the business enterprise and the improvements to the prison’s amenities being able to flourish under this particular Warden is non-existent – destroying the element of ‘could happen’ that can assist even mediocre comedies in their quest to make people laugh. 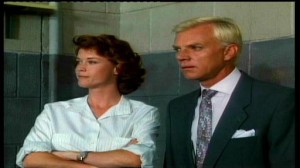 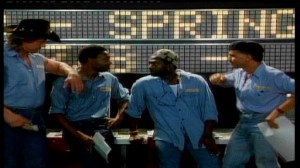