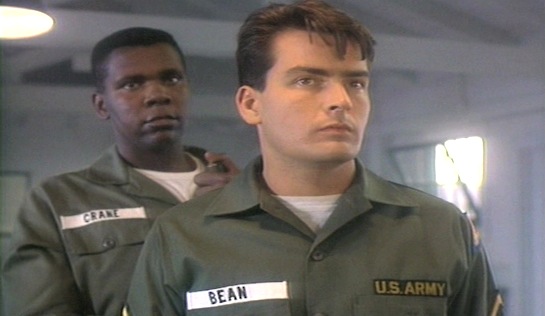 You look at this film and The Brig (1964) and it’s hard to imagine two more different approaches to managing military miscreants.

Indeed, the Marines in The Brig are, as far as we know, all being punished for minor infractions like being AWOL, while in Cadence the regular Army men have mostly been convicted of murder and rape and other nasty offences. But Cadence’s Camp Barenfeld in Wittsburg, West Germany is a holiday camp compared with the brig’s torturous regime.

It’s 1965. Into the Barenfeld chalet enters Private Franklin Bean (Charlie Sheen), whose bender after his father’s funeral in Montana ends in an assault on a military policeman and a little collateral damage, and he gets 90 days inside.  The only other occupants of the lock-up are all African-Americans: compound leader Roosevelt Stokes (Larry Fishburne), boxer Edward Webb (Michael Beach), Eugene ‘Spoonman’ Bryce (Blu Mankuma), who faces possible execution for a murder, Andrew Lawrence (John Toles-Bey), convicted of rape, and a kid with a heavenly voice, Harry ‘Sweetbread’ Crane (Harry Stewart). Bean could never be accused of being over-friendly and his introduction to the group is a little tense. A fight with Webb over a cigarette lighter Bean (rightly) accuses him of stealing doesn’t help.

In time, Bean gains the trust of the others (starting from the point at which he doesn’t rat on Webb), and vice versa. But he doesn’t ever see eye-to-eye with the camp’s boss, Sergeant Otis McKinney (Martin Sheen, who also directs the film). And vice versa. Bean refuses to add the word ‘Sarge’ to every response he gives McKinney, which marks him as a troublemaker. Not a major one, admittedly, because he follows virtually every other command. And McKinney, who is supposed to be a tough, nasty, bigoted disciplinarian, comes up well short of the mark when put up against movieland’s toughest, nastiest, bigoted disciplinarians.

Under McKinney, Camp Berenfeld enjoys a relatively relaxed and tolerant regime. The men get taken into an area bounded by forest each day to work. They are not under heavy guard, and it’s there that Bean starts self-redemptive work on restoring an old windmill to working order, honouring his father. And the prisoners are pretty much left to their own devices in their dormitory.

But the highlight of the film – in spite of the racial stereotyping – is the men’s marching in the parade ground, where they perform the ‘Stockade Shuffle’, a military cadence with five-part harmonies (to Sam Cooke’s ‘Chain Gang’) and actions that seem to anticipate the Jackson 5. No one objects; indeed, the departure from standard marching seems encouraged. As I said, it’s a relatively tolerant regime. Oh, and Bean joins in after some initial bemusement; a measure of his acceptance.

But McKinney, hurt and angry at his own son’s rejection of him, can’t let go of the fact that Bean won’t break and won’t bend. He drags all six prisoners to the work site on a dark, rainy night. The dreamy Crane wanders off. There is a gunshot. In the court martial that follows Bean suddenly finds himself alienated from his fellow prisoners; all the bonding around windmills, basketball one-on-ones and Stockade Shuffles rapidly evaporates… And then, as he is about to head off to Vietnam, it makes a brief, unexpected reappearance, just in case the viewer couldn’t handle a less-than-happy ending.

It’s the closest the film gets to the raw, uncomfortable Brig… which in its final scene reveals its own artifice to allow the audience to leave a little happier. Of all film genres, you’d think that the prison movie is one where happy endings are not so de rigueur. 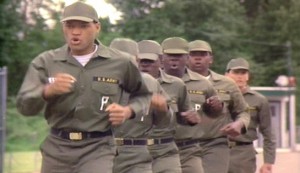 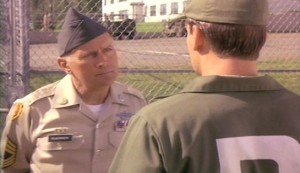