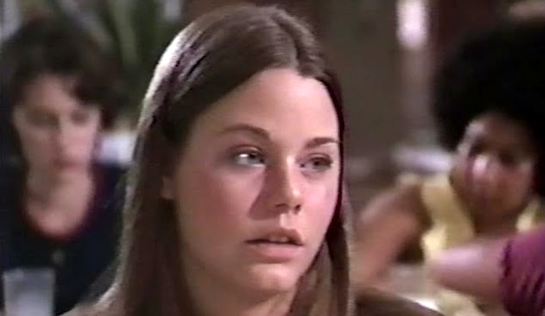 There are many men of my generation who will remember Susan Dey as the only reason for watching The Partridge Family. My memory of Laurie Partridge has dulled considerably, but it could well be her who has strayed into this TV movie, and into this TV prison, by mistake.

Dey plays a slightly prissy 17-year-old, Valerie Smith, newly graduated from high school, who heads off on a road trip to San Francisco with her friend Joleen. They have just started out when Joleen’s car breaks down, but one of Joleen’s friends, Buddy (Sam Bottoms) pulls up and offers to take Valerie the rest of the way. He is overly familiar; Valerie doesn’t know him and is reluctant to accept the offer, but is ultimately pressured into accepting the ride. Not far into the trip Buddy decides to rob a liquor store and forces Valerie to assist him at gunpoint. The shopkeeper raises the alarm and is shot dead; the Police arrive and both Buddy and Valerie are arrested.

At her trial Buddy insists that he and Valerie were secret lovers and that it was only at her urging that he committed the robbery. All the witnesses back his version that she was a willing participant, and she is duly convicted of the murder and sent to the San Marcos School for Girls, which looks like, well, a school for girls.

It is a big modern prison campus and has modern facilities like a hair salon and its own modern euphemistic language, including the delightful rebranding of solitary confinement as ‘meditation’. The staff meanwhile eschew all modern correctional techniques, keeping the girls in their place by reinforcing their uselessness wherever possible, and failing to intervene in their most blatant acts of skulduggery.

The prisoners are divided into two rival camps – one led by the duplicitous, scheming Susie Kurosawa (Suesie Eléne), who is a favourite of the staff, and the other by the forthright Tommy Washington (Jonelle Allen, who at 30 was probably a bit old to be playing a teenager). Valerie knows she doesn’t belong in this circle and tries to avoid taking sides, but after her 14-year-old friend Sarah has a vat of boiling water tipped over her by the Kurosawa gang, she decides that aligning herself to Tommy’s crew might be in her best interests.

She continues to battle, aghast at the way the ‘school’ is managed, and not fully comprehending that prison could be much, much worse. She becomes a bit manic.

Away from the prison, her attorney resorts to some very creative work to explode Buddy’s story, but when he does it is almost in vain as Valerie prepares to join in on an escape attempt after suffering one tragedy, one unhappy setback too many.

Cage Without a Key is also known as Imprisoned Women (oddly, given that all the inmates ares opposed to be juveniles), and may be one innocent-woman-or-girl-in-prison movie too many. It is distinguished only by the fact that the prison itself is possibly the only thing where there is much hint of ambiguity – all the major characters are pretty much either good or bad, with any shades of grey nicely papered over. Even when Tommy arms herself with a shank – intending to stab Kurosawa – there is no question of, “Should she be doing this?”, just full-on support for what she is about to do. Nothing too complex for the loyal Partridge Family audience, perhaps.