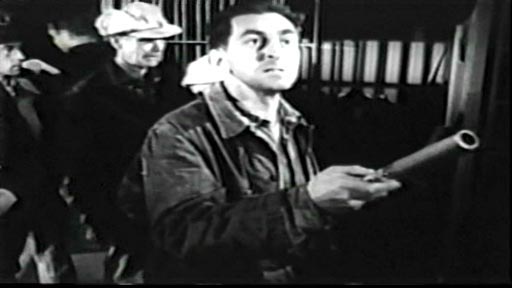 On 30 December 1947 twelve prisoners escaped from the Colorado State Prison in Cañon City. Now, some prisons might be embarrassed that their security systems were so comprehensively overwhelmed and defeated. Not this one. By 30 June 1948 this film was showing in the cinemas, celebrating the event, with the prison’s Warden, Roy Best, even taking a starring role, playing himself.

The film kicks off documentary-style with the narrator suddenly becoming Best’s interviewer. Best is a Warden in the tradition of Lewis E Lawes and Clinton T Duffy (see 20,000 Years in Sing Sing [1932] and Men of San Quentin [1942] for example); he’s a proud man, not afraid of self-promotion. Whose is the toughest job in the prison? “Naturally I think mine.” “You don’t show it.” “Nevertheless, it’s always with you.”

We turn to the prisoners, many of whom can see no light at the end of the tunnel. One of the harder men, Carl Schwartzmiller (Jeff Corey), organises a mass break out of the disaffected. He seeks the assistance of Jim Sherbondy (Scott Brady), who runs the dark room and is so trusted that the guards don’t even enter it without his permission; it proves an ideal place to hide all the home-made weaponry. Every prisoner in the joint seems to know about the escape bid but the guards are caught unawares.

The film becomes a simple tale of these two men. On one hand, the leader Schwartzmiller, a career criminal, tough and desperate (though not without a bit of charisma, too). On the other, Sherbondy, a good kid who has made a couple of (very) bad decisions – who initially doesn’t want to be involved in the break, but is finally won over when he realises that, for all his good record in recent times, he’s likely to spend another 10 or more years in jail.

The escape is not unlike those in Folsom’s Riot in Cell Block 11 (1954) or Alcatraz’s Six Against the Rock (1987) – except that this one succeeds. Guards are overpowered and taken hostage, uniforms are swapped and one of the guard’s keys used to open the gates to freedom. Easy. Unlike those other two movies, where the tension is around whether the prisoners will get out or not, the drama here is whether the men can get properly away. They don’t. In freezing, snowy conditions, two are shot dead, and all the others are rounded up within 61 hours. Sherbondy is the final man to get caught and hastens his own recapture by taking pity on a child suffering an appendicitis attack; underlining his essential goodness, he releases the child and his mother, allowing her to take him to hospital, and then takes off into the snow.

The women in the movie provide the movie with its interesting counterpoint. We see some women in traditional noir roles (the floozy, for example, into whose arms one of the escaping prisoners stupidly runs, only to be caught straight away), but in the main the women are strong, calm and heroic while the male prisoners are often hot-headed and, well, not-too-bright. One elderly woman attacks Schwartzmiller with a hammer which she hides under her apron. Their matter-of-factness and quick reading of each situation contrast nicely with the prisoners’ lack of strategy and judgment. And they make an ordinary film a little less ordinary.

If only the men had followed Warden Best’s example more closely. 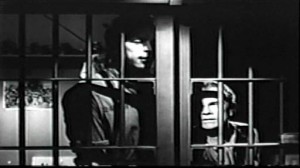 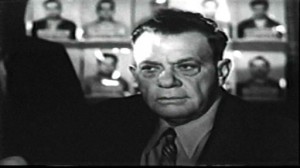 I see that there are now nine-state and four federal prisons located in Fremont County, Colorado, centred around Cañon City, which has just 16,000 inhabitants. The town has obviously been able to build upon its 1947 success.