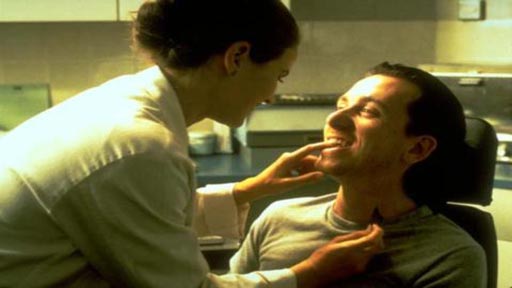 I found this an awfully hard movie to watch. A beautiful young dentist, Rachel Clifford (Julia Ormond), starts working at a London Prison, emotionally vulnerable after the breakdown of her marriage as a result of her husband having an affair.  Within hours she has fallen for a manipulative, unattractive prisoner (Tim Roth), and visits him (which surprisingly provokes no reaction at all from staff), meets him on the outside (he is allowed regular leaves to attend a university course, and this facilitates regular assignations) and takes all sorts of risks with him inside the prison (such as sending him audio tapes with her voice on them, trying to ring him, and continually seeing him for dental work – all without arousing suspicion).

Every Prison Officer’s instinct screams (a) “Don’t do it!” and (b) “That wouldn’t happen!” – but of course (a) she does, and (b) it does. When the other prisoners suss out what’s going on (unlike the staff who seem to have no idea), they start to exert pressure on both of them which leaves them both in an untenable position and leads to a big climax (no pun intended).  I can watch prisoners escape in movies and not feel the need to intervene (and indeed can applaud their ingenuity and urge them on). I can watch films with prisoners rising up against prison regimes and not feel the need to identify with the prison staff. But I have found that I am unable to watch a film where there is an affair between a staff member and a prisoner – at least one where the staff member should be smart enough to know better and it all seems so quick and so unlikely – as a dispassionate outsider might. This may be a very good film; I wouldn’t know.