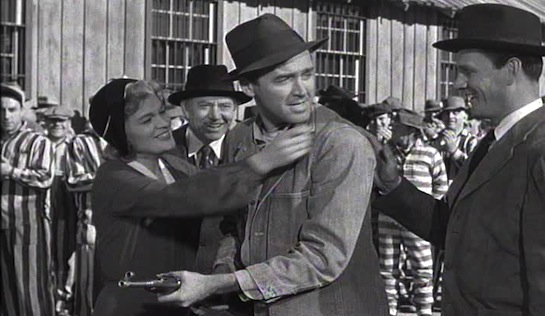 This is one of those stories that would quickly be dismissed as ridiculous… were it not based on a true story.

It’s the story of David Marshall ‘Marsh’ Williams, who invented the M1 Carbine amongst other things, as told by Williams’ former Warden, Captain H T Peoples (Wendell Corey), whom Williams and his wife have enlisted to tell their son (who is being picked on at school) that his father was once a prisoner. Williams was a dab hand at inventing floating chambers and short-stroke pistons, it seems, but not so good at talking to offspring.

Williams (James Stewart) is a headstrong young man. Just ingloriously out of the Navy, he returns home, hoping to take possession of his share of the family farm. His father has other ideas; he wants his son to earn it first. Williams decides instead to go his own way; he marries his childhood sweetheart, Maggie (Jean Hagen), works on the railroad, and supplements his income by working an illegal still. When law enforcement agents discover the still, Williams and his associates fire upon them; a Deputy Sheriff is killed and Williams (the best shot of the gang) is charged with his murder. After a hung jury, Williams – expecting a 15-year plea bargain – pleads to second degree murder and cops 30 years.

His first years in prison are troubled. He has a decent-sized chip on his shoulder and gets put on the chain gang for possession of a shiv after a stoolie is stabbed. Even after he is moved to the Caledonia State Prison Farm in North Carolina he is a man who wants his own way; he refuses to write to the loyal Maggie (insisting that she would be better off divorcing him) and his family, and serves a record 30 days in the hole on bread and water for defying Captain Peoples in front of all the other prisoners.

It is in the hole that he starts devising a new firearm. Soon afterwards, given an undeserved chance by the Warden (including a 24-hour unchained leave with Maggie), he returns to work in the blacksmith shop and, in his spare time, makes his new firearm out of bits of scrap metal. When Captain Peoples finds out, he lets him continue to work on his gun, rather than putting him back in the hole. Even when the prison board wants the whole gun business scrapped, Peoples continues to back Williams and the faith shown in him is ultimately vindicated – his M1 carbine (a repeating rifle much lighter than existing models) becomes the US Army’s main weapon in World War II.

After serving 8 years, Williams is pardoned in 1929, secures a contract to work for gun manufacturer Winchester, patents 68 firearms (and other) inventions, and is free to spawn a child to whom he can’t talk.

The film is of course about Williams, who only took the nickname ‘Carbine’ after this film was released, but is in some respects just as much about Peoples, who showed great courage and foresight (or stupidity) in allowing Williams to produce a firearm in the middle of his prison – and who helped a wilful prisoner realise his enormous potential, despite considerable political pressure. The depiction of Williams is refreshingly balanced – he is shown as brilliant but stubborn, selfish, bitter and (weighed down by the crushing 30-year sentence), at times forgetful of his culpability in the shooting. Much like Williams, the 1920s North Carolinian justice system is also shown to have its foibles; petty and harsh at one turn, forgiving and progressive at the next. The view of Peoples is less critical, perhaps appropriately.

Someone may well tell me that there are heaps of examples of prisoners somewhere making guns, grenades, swords or other munitions. Until then, I’m happy to regard this as an extraordinary story. 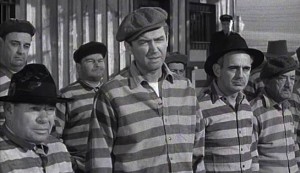 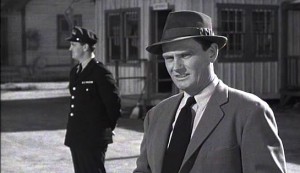