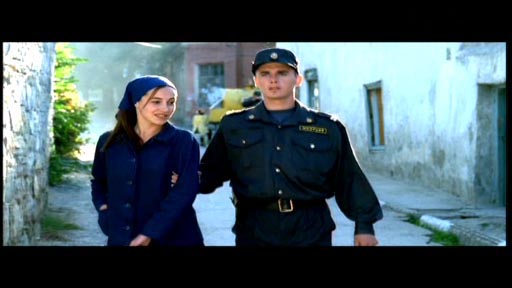 As a prison film, this is disappointing. But it’s disappointing because it is so faithful in its retelling of the story of the Georges Bizet opera (or the Prosper Mérimée novella, if you want to go back further), and the film’s prison scenes account for such a tiny proportion of the screen time.

Sergei (Igor Petrenko) is a cop, new to his posting at the women’s prison. It’s your normal women’s prison, where the rules are explained to the new starter: you can take any of the women as a sexual partner, but you must limit yourself to that one until she is released or it causes problems. That sounds fair and reasonable. Straightaway one of the women, Carmen (Olga Filippova), flirts outrageously with him, and he is immediately smitten.

Carmen is involved in a fight with another woman in the cigarette factory in which they work, slashing her across the face. The guards leave their beers (yes, beers) to break up the fight, and later Sergei and another guard are required to escort Carmen on foot through the streets. You might think it’s strange that a system that requires its guards to carry assault rifles and service revolvers would not require its prisoners to be mechanically restrained in any way as they are being led through the streets, but handcuffs are clearly not de rigeur in Carmen’s Russia. Nor are escort vehicles, seemingly.

With the other guard being distracted by a beer-and-pie truck, Carmen seduces Sergei, pleading not to be returned to the prison. They make a hasty, partly-spoken pact. She then whacks him in the groin and escapes. Unlike Don José in the opera, who was imprisoned and demoted, Sergei is just demoted. But his whole life is turned upside-down; he is besotted and continues to seek her out. He tracks her down and she repays him, carnally, for the the favour he did her in allowing her to break free.

And that’s the finish for Sergei. He pursues her, joins her gang; they rob and wheedle and kill people and, extraordinarily, manage to evade the Police. Sergei is insanely jealous of Carmen being with other men, whether it’s an ex-husband or a new target she’s setting up to fleece, or just someone she likes more than him. He kills a couple of his rivals, which doesn’t really impress Carmen, and then kills her when she confesses that she no longer loves him and won’t live with him or restrict herself to him. She dies without anyone singing the Toreador Song.

Petrenko’s Sergei, who recounts his story from prison, is suitably intense in a Tom Cruise-ish sort of way. And much of the film is beautifully shot, a good deal of it around the Crimean coastline. But Carmen, on whom the film depends to make it all work, isn’t quite bewitching or beguiling enough for me. The opera might be better. 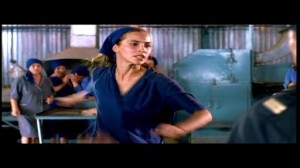 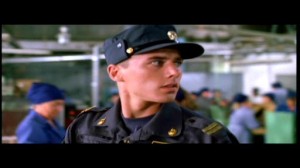