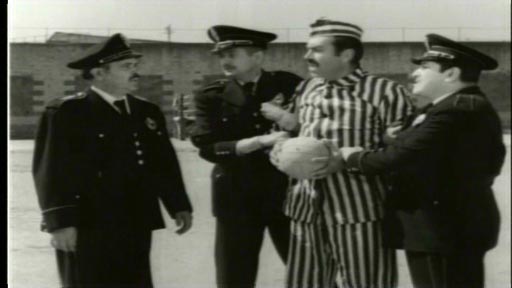 Literally Jail Meat, I think. And yet another film that promised English subtitles, only to let me down. On the plus side, you do get to see massed prisoners dressed up as something like ice-cream vendors, and when they line up against vertical bars they become chameleon-like.

All the thumbnail reviews on the web tell me that Pedro Armendáriz  stars in this film as Pablo, an upright man struggling to survive in prison after he is convicted of murder – having accidentally killed the cruel husband of a female neighbourhood friend. While he is in prison his beautiful wife and family fall upon hard times and he begins plotting an escape, aligning himself to some untrustworthy men in the process. Soon, we’re told, Pablo is in over his head with some very bad and powerful dudes – drug dealers, no less, who would seem to have introduced the kick-the-soccer-ball-filled-with-drugs-over-the-wall trick.

Because my Spanish is non-existent I have to rely on this review by Raúl Miranda López, courtesy of Google Translate, and I’m so very grateful to it as it makes sense of the insensible:

“You do not know what it means to be outside.”

The Mexican prison melodrama has two well-known spaces: the Islas Marias and Lecumberri Palace. Before the maximum security federal prisons and social rehabilitation state (Social Rehabilitation Centres), Lecumberri appears huge, but always crowded, we present the film with panoramic panoptic that accounts for its architecture and its control system, also described his classical building facade that greets punished for release later on the strength of the state.

A precise fades elliptical editing that condense the time of closure (Gómez Muriel was a fan assembly Eisenstein, Pudovkin and Griffith), we will presenting daily life in prison. In particular the life of Pablo (Pedro Armendariz), humble worker, who comes to prison (“I jumped the lion”), who is quickly seized by the inmates, who caught her belongings (your “goats”). A world controlled by the most harsh and cruel convict maintaining “order” martial within the bay, and acquired the rank of “Major” (“The Worm” Carlos Lopez Moctezuma), then Paul will assume this position of control hierarchy.

Is a microcosm of the lumpen (“pure murderers of the worst”) that fall honest workers there by misfortune, a member of the middle class favor for the death of the head (the student Luis Beristain), a slaughters old mentally ill children with epilepsy (pathetic rival Peter Lorre in “M” by Fritz Lang), a deeply devout and religious prisoners to which he has appeared “the Blessed Virgin”, a criminal alien who has proven scammer proudly worst and best prisons in various countries, a corrupt lawyer toff  “compratestigos who gets caught up in prison in an unusual and paradoxically attenuates the real revenge, replaced by revenge against those whose class women “marry” with their dogs and living in Las Lomas. Other characters who are “rebuena people” and rip it on guitar and give the singing (“pure child of the rattle), but also are more “blunt” to kill with “tip” on demand or without reason.

Carne de presidio with cigarettes as vital consumer, bought in the shop, women in their underwear in cuts in the cells of overcrowding, the “ranch” (food rations), but precious inedible inside out (“to wag his mustache) , the prison drug trade (for the first time in Mexican films shown) within a soccer ball, the fatigue or “Talacha” of the baths to get ten dollars a week for maintenance of wife and mistress little boy stranded and the fourth for conjugal visits impracticable for the repulsion of beautiful Martha Roth to poverty, the democratic pinstripes with everything and cuartelera of “majestic”, “Nahuatl”, “cools”, “chacalitos” “subtraction” and “males” who only speak slang, and still say no peladeces as prisoners of The apando (Felipe Cazals, 1975) or hole (Beto Gómez, 1996)

Then freedom, but also the release, involuntary family burden (now living in the house of rich Alvaro Obregon street), represented symbolically by the drag on a cigarette in the modern Avenida Reforma, a good comrade in prison also pardoned, as a company to start a new life.

Carne de presidio was released on July 2, 1952 at the National Cinema, a venue popular for film set in the neighborhood of La Merced. The film combines elements that make it remarkable: the story and screenplay by Luis Alcoriza, the acting presence of Pedro Armendariz, Martha Roth and Carlos Lopez Moctezuma, but also of “El Perro” (Gilberto González), “The Charrasqueado” (Arthur Martinez), “The Nuts” (Polo Villa), and “weeping” (Manuel Donde), the leadership of Emilio Gómez Muriel (co-director of the magnificent Networks, 1936) and the signature song “When the destination “by José Alfredo Jiménez:” how beautiful is revenge … cuando Dios nos la concede”. when God gives us. “

I recommend reading “Testimonies for the history of Mexican cinema, Volume 3, published by National Cinematheque in 1976, a series of interviews with film directors and actors of national, coordinated by Eugenia Meyer.

You can check it out yourself at http://www.correcamara.com.mx.  After that, I’m not sure that I want to know what really happens. 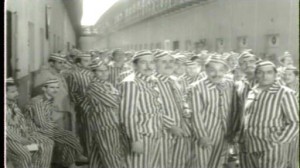 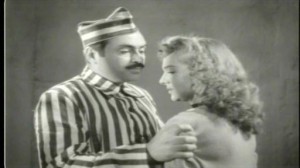