The Najayo Prison for men at San Cristóbal, about an hour out of Santo Domingo, is right next door to the Najayo Women’s Center of Correction and Rehabilitation. So close that the men in the old prison, if they can get to a high window on the upper storey, can pass messages to the women next door, and vice versa, by an elaborate, bespoke sign language. ‘Woodpecking’, they call it. “The thing is that when the woodpeckers drill their holes they grasp onto the tree – the same way that the guys climb to the windows and grab onto the rails so they can talk to us,” one of the women says. Or you can choose to make up your own explanation.

Julián Sosa (Jean Jean) is a new arrival at the men’s prison, serving three months and ‘preventively detained’ awaiting trial on robbery charges. He’s lanky and glowering, and is soon conscripted by one of the prison’s racketeers, Rogelio Encarnacion, known as ‘Manaury’ (Ramón Emilio Candelario), who has been prevented from woodpecking, to pass messages to his girl, Yanelly (Judith Rodríguez). Julián does as he’s told, and surprisingly quickly (both because he’s illiterate and because the signing is not easy) becomes an effective go-between. But the messages aren’t easy; Yanelly has been hurt by Manaury’s flirting with other women and wants nothing more to do with him. And then she starts showing an interest in the messenger, Julián.

Julián learns quickly. Through sheer luck and a bit of cunning he manages to get invited into the women’s prison (to fix an air-conditioner, despite having no knowledge of air-conditioners), and gets to meet Yanelly face-to-face. They kiss and romance blossoms, but he is sensible enough to deny everything to Manaury, who is starting to have grave suspicions. At Yanelly’s urging, he joins the music team (despite having no musical ability) and with a bit of cunning finds himself part of a concert at which Yanelly is singing. The concert, however, confirms Manaury’s worst fears – just through seeing the way that Yanelly makes eyes at her new love. He storms out, frames Julián with drugs and tips off the authorities.

Julián denies all knowledge of the drugs (and of another woman’s underwear found in his belongings – the presence of which Yanelly reacts to very badly), and responds by suggesting to the authorities that they check the kitchen – from where Manaury peddles his drugs. It doesn’t help; both Julián and Manaury are sent to the tougher La Victoria prison, described earlier by another prisoner as “hell on earth”, but kept in separate parts of the jail to prevent further recriminations.

And it’s there that the film builds to a dramatic climax, with a riot thrown in for good measure (as the backdrop, intriguingly, and not as the big climax).

It is a solidly crafted film, with strong performances all round. It helps no end that it was shot on location at the Najayo prisons and La Victoria, with prisoners as extras, and as a result you presume that it provides a reasonably accurate picture of life inside those Dominican Republican prisons. It also claims to be ‘inspired by true life events.’

The men’s prisons are such crowded, bustling places you’d think it might be difficult for the prison heavyweights to recognise the newcomers so that they can prey upon them. But they do. Mobile phones, weapons (including a gun) and other items abound, but there’s no sense of the guards being corrupt (indeed, they are all portrayed as competent and no-nonsense) – just that the challenges in keeping the contraband out are great. Greater, one suspects, than the challenges posed by woodpecking, on which authorities in both the women’s and men’s prisons see the need to clamp down. Maybe sign language is the thin edge of the wedge. 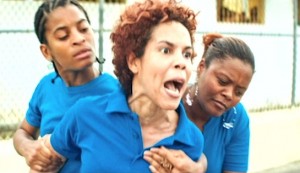 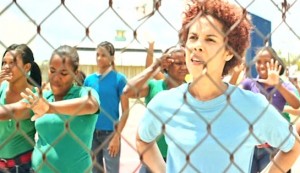 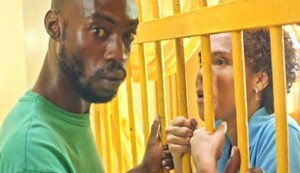 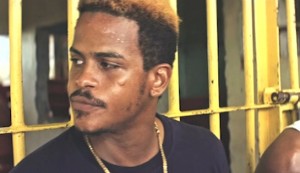