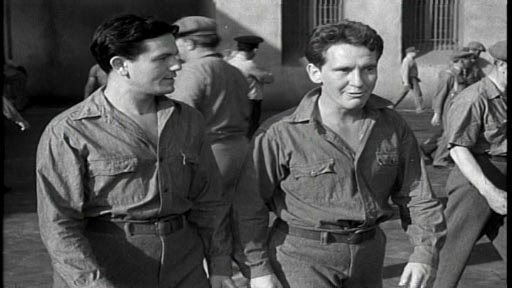 A remake of 20,000 Years in Sing Sing just eight years after that film’s release. Why? You might well ask.

It’s like Warner Brothers thought they’d lost every copy of 20,000 Years and needed a back-up copy for their records. John Garfield plays the Spencer Tracy role of a cocky gangster who cops 5 to 30 at Sing Sing (the ‘Castle on the Hudson’) for a robbery and shooting at Police. In this version his name is Tommy Gordan (according to all the newspaper headlines that keep flashing across the screen) or Tommy Gordon (as it appears in the credits). Tommy had always managed to avoid prison in the past and he fully expects his lawyer to be able to buy his way out of his sentence on this occasion. He hadn’t counted on the scrupulously honest, decent, fair-minded, reformist Warden Walter Long (Pat O’Brien), however, and soon the Warden has him toeing the line.

Well, not completely. Tommy’s still keen to escape and finds a willing partner in Steve Rockford (Burgess Meredith).. but bows out of the planned escape at the last minute when he realises that it’s a Saturday, and he’s superstitious about Saturdays. Fair enough. Steve’s plan doesn’t go exactly as planned and he finishes throwing himself off the top tier rather than face the electric chair after fatally shooting a guard. Tommy’s decision not to take part in the escape gives the Warden some comfort that Tommy has turned the corner.

So when Tommy’s girl, Kay (Ann Sheridan), is critically ill after throwing herself out of a moving car rather than fight off the advances of Tommy’s duplicitous lawyer, Ed, the good Warden grants Tommy a day’s furlough on his honour to go and see her. Like most critically ill patients, she’s in her apartment block with a nurse, rather than in a hospital, and Ed turns up there at the same time as Tommy. They fight, and Kay shoots Ed, who names Tommy as the shooter with his last words as Police arrive. Tommy knows he will cop the blame, and is about to jump ship when he reads that Warden Long is being pilloried for his honour program and is being pressured to resign. So he returns to prison, a man of honour.

For the first time in his life he has done the decent thing.. protecting the Warden’s reputation and saving Kay from a jail term. This is clearly of comfort to him as he is led to the chair. The sub-text is that none of this would have been possible without the inspiration and influence of Warden Long, whose ethical approach was no doubt modelled on the man who wrote the screenplay, Lewis E Lawes, Warden of Sing Sing.

Is it any better than the original? Marginally, I think. It’s fast paced (just 76 minutes) and Garfield’s brashness and quick-fire gangsterisms perhaps top Tracy’s, and Sheridan’s Kay is more believable than Bette Davis the first time around. But is it worth the re-run? Nup. 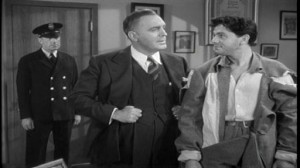 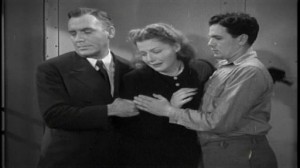