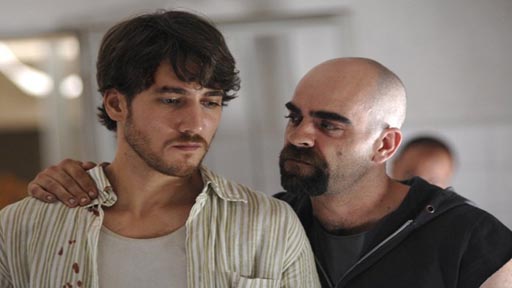 With all the fuss about 2009’s Un Prophète being a prison movie masterpiece – if not a masterpiece in any genre – this less celebrated Spanish prison film may have been overlooked. It might not be in the same class – it’s certainly no masterpiece – but there’s an awful lot to like.

Juan Oliver (Alberto Ammann) is about to start work as a prison guard. He wants to make a good impression, so he leaves his pregnant wife and goes into work a day early, just to meet people and have a look around. His timing isn’t great; as he’s being shown around, a piece of plaster from the ceiling falls down on his head and knocks him out. He’s placed in an empty cell, Cell 211, while medical assistance is sought. Just then, a riot breaks out and his fellow guards flee, leaving him to fend for himself.

When he comes to, he thinks quickly. He gets rid of shoelaces and other things that would expose him as a non-prisoner, and coolly tells the riotous mob that he’s the new occupant of 211, in for murder. Rather improbably, he immediately earns the trust of the leader of the rioters, Malamadre (Luis Tosar), by demonstrating some sound tactical thinking (self-preservation, really, dressed up as strategy) and neat handwriting (useful for writing demands). While he may have won over the charismatic leader, Malamadre’s lieutenants are a bit more sceptical (and a touch jealous) and begin a bit of due diligence testing of the new boy’s credentials. Meanwhile, from his position of relative prominence, Juan is able to assure the prison warden and the hostage negotiator that he is OK – provided that his cover is not blown.

From that point, many Hollywood prison movies would be unable to resist the temptation have Juan single-handedly quell the riot, get all the good guys out alive, and perhaps even salvage the State’s relationship with the Basque nationalists by saving the lives of the three ETA terrorists held hostage by the rioters. Fortunately, a different path is chosen.

Juan is desperate to get out, and his desperation is only heightened by seeing his wife, Elena, on TV – being buffeted about, having stupidly put herself in the middle of an unruly crowd outside the prison gates. He is also increasingly placed in challenging situations that call upon him to act in the role of ruthless criminal in which he has cast himself, rather than as a prospective guard. At the same time we see glimpses of Malamadre’s humanity, a hint of the justness of the rioters’ cause and the brutality of some of the guards; our sympathies shift teasingly back and forth.

Shot in the Zamora Prison with plenty of authentic extras, it’s tense, gritty, dangerous, threatening, full of twists… and very human. All the things you might hope for in a prison drama, really. 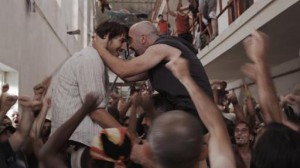 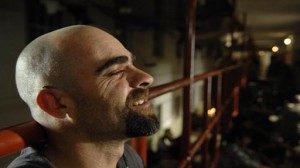