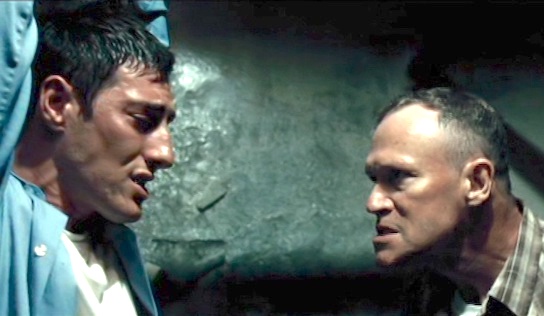 It’s a bit hard to pin a label on this film. Completed in 2008, it took another three years to release it, marketed ultimately as a horror movie. But it’s more a supernatural movie; horror film buffs will inevitably be disappointed by it, and those who aren’t (such as myself) might be pleasantly surprised.

It takes on a massive challenge – asking the audience to empathise with a rich, high-flying, sleazy, unscrupulous defence lawyer who has sex with a colleague while talking on the phone to his wife, and pays a thug to ‘scare’ a crucial witness for the prosecution into not giving evidence against his client. The scaring is effective; the prosecution case collapses, and the brash lawyer, Michael Gray (Eric Balfour), racks up another victory.

Gray drops in later that same evening on the South River State Penitentiary to tell another client, Charlie Johnson, who had been charged with the rape and murder of a little girl, that his appeal had been successful and he will be released. On entering the prison he is met by Ray Clement (Michael Rooker), a tough guard from the old school who makes it clear that lawyers who get guilty murderers and rapists off charges are not particularly welcome. When Gray meets his client, Johnson unburdens himself, confessing to the rape and murder, and then stabs himself in the throat several times with a pen on which Gray still has his hands. Clement, just outside the door, enters the room to see the lawyer drenched in blood and holding the pen. Johnson dies and Clement becomes the main prosecution witness.

Gray is duly convicted, abandoned by his law firm, placed in the same jail… and in Cell 213 – the same cell that Johnson was in. It proves to be a magical, supernatural cell. Words from the Bible chisel themselves into the wall, for Gray’s eyes only. We learn of the significance of 213: “I know where thou dwellest, where the seat of Satan is” (Revelation 2:13, Wycliffe translation); it is a special cell in which battles take place between God and Satan for the inhabitants’ souls.

At the same time, the State Correction Services administration is waging a different sort of battle. A beautiful corrections official (has there ever been a plain official waging war on a corrupt system?), Audrey Davis (Deborah Valente), starts an investigation of a disturbing number of instances of excessive force by guards at South River. Many involve Ray Clement. And 90% of suicides, she finds, occurred after the prisoners had murder sentences pled down or reduced. Curious.

The program of official dislike for Gray continues. Clement and the unctuous Superintendent of 30+ years, Joseph Sands (Bruce Greenwood), make life as difficult as possible for him. On noting that he is thanatophobic (harbouring a fear of death), they place him in the prison’s morgue, embalming bodies. At least there his fellow mortuary worker, Jefferson (Rothaford Gray), gives him some tips on how to survive in prison – and more specifically, how to resist the advances of another prisoner, Six.

But the Superintendent and Clement and Six and the morgue have nothing on Cell 213, which relentlessly torments Gray with visions of the witness whom he paid to have scared… but who was bloodily silenced, along with his family. “Simon, Simon, Satan has asked to sift you as wheat” appears on his cell wall. He is wracked with guilt and consumed by powerful forces pushing him towards redemptive acts.

Audrey, meanwhile, is becoming more concerned about what she assumes is the maltreatment of Gray on seeing his disintegration. Her race to get to the bottom of what happens to prisoners at South River is more in keeping with the action thriller than the horror flick. As is the quantity of blood shed. Just.

Cell 213 has a lot more to offer than its publicity might lead you to expect. Few prison movies have supernatural forces vying for prisoners’ souls, and only marginally more dwell on prisoners plagued by feelings of guilt. Few toss up the moral complexities inherent in empathising with a very nasty character, innocent of the crime of which he has been convicted. Quite a few more feature pretty heroines and corrupt prison officials, but even here the corruption is a little more complex – borne of a desire to see evil punished, rather than for personal gain, and passively employing the power of a supernaturally religious cell. 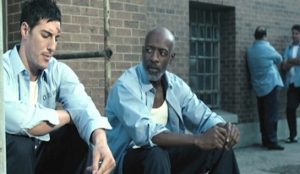 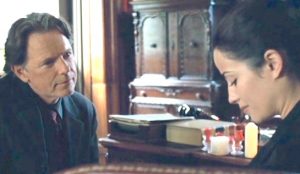 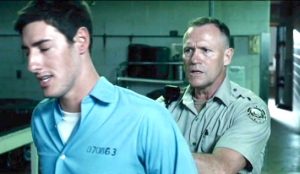 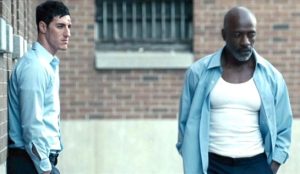 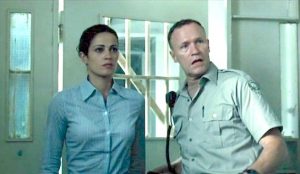 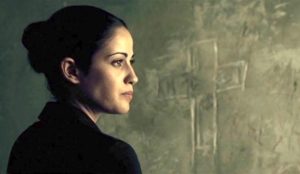