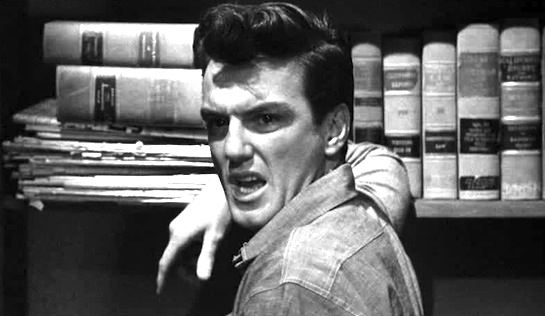 “So, the story of this man is not yet over. Nor is the story of Cell 2455, Death Row. Whether Whit descends to the gas chamber or whatever the future holds for him, Cell 2455 still stands – ready and waiting for the next Whittier.” Thus the film and its subject both stop – mid-sentence.

It’s nice to think that the cell itself might be the star of the show; that would be a different twist. But, alas, that is not the case.

The story is instead based on the autobiography of ‘Red Light Bandit’ Caryl Chessman, written in San Quentin between appeals and petitions for stays of execution. In the film version, Chessman’s character is Whit Whittier (Robert Campbell as a young man and William Campbell as he gets older), who turns from stealing food after his mother is paralysed in a car accident and his father uses all his savings on medical bills, to delinquency, to living the high life funded by brazen armed robberies.

We see him graduate from juvenile reform school to San Quentin, to Chino (the California Institute for Men, which which now holds 4,700 but in the 40s was a brave new prison without a secure perimeter – and from which Whittier escapes), to Folsom and back to Death Row at San Quentin. To get there he was convicted of a series of attacks on couples in lovers’ lanes in which he robbed them at gunpoint and raped a number of the women. He became liable to receive the death penalty when he was found to have ‘kidnapped’ two of the women, the abductions being capital offences under the ‘Little Lindbergh law’.

Chessman studied law in his cell and represented himself at his trial and subsequent court proceedings – becoming a poster-boy for the anti-capital punishment lobby in the process. Despite his legal prowess, Whittier in the film comes across as a sneering, blaming, self-serving individual whom lobbyists would be loath to use as a poster-boy for anything.

Chessman was ultimately executed on 2 May 1960 after almost 12 years on Death Row. His final scene wasn’t without its own drama, it seems – yet another stay of the execution being granted and phoned through just after the death chamber had already started filling with its poisonous gas – to which others would have been exposed were the door to have been opened. It’s a pity the filmmakers couldn’t wait until the story had reached its conclusion; the real end to Chessman’s life was far more interesting than the wooden portrayal of it here. 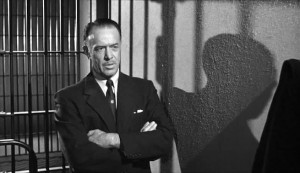 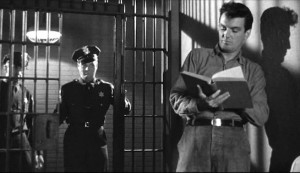