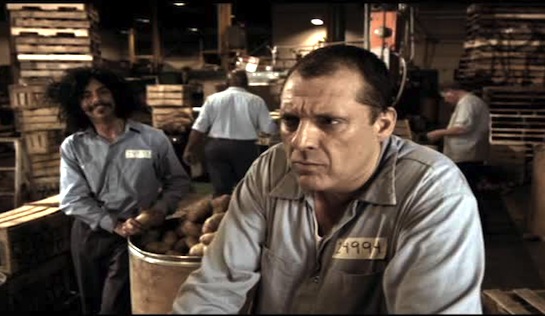 It’s 1976. Leroy Lowe (Tom Sizemore) is the Grand Dragon of the East Texas chapter of the Ku Klux Klan. When he gets 3 years in the Low Lee Tuna Prison Work Farm for conspiracy against the US Government, misapplication of funds (3 counts) and tax evasion, he has to relinquish his specially decorative Grand Dragon hood and get to work sorting potatoes.

Leroy and his boofy fellow Klansman and cellmate, Bubba (Kevin P Farley), are invited to weekly meetings with the blustering Warden Merville (Stacy Keach, in danger of being typecast after also playing the Warden in Unshackled) to listen to him extol the virtues of the farm’s different potato varieties. It’s hard to see how the Warden could meet with all his prisoners with such regularity, so it appears that the cellmates’ politics might be the attractor. When Bubba chokes on a piece of potato and ironically renders himself something of a vegetable, Leroy wins a new cellmate – a decidedly non-white Mexican farmhand, Emilio (Héctor Jiménez). Emilio is apparently not as welcome as Bubba at the Warden’s meetings.

Emilio might not be your standard Latino stereotype. He is chatty and very frustrated by his bad hair. He longs for perfect hair “like Dr Ben Casey”. He and Leroy don’t exactly hit it off from the start; no surprises there. But after the initial hostilities they find that they need each other. No surprises there, either.

While Leroy might tune out while the Warden is waxing lyrical about potato harvesting, it’s hard for him not to notice the maid, Madalena (Olga Segura), who cleans the Warden’s office. She flirts, shyly. Why an attractive 20-something Latina would flirt with a racist, overblown 50-year-old is a bit hard to fathom, even if she’s not immediately aware that he is a KKK Grand Dragon. So Emilio translates the notes in Spanish that Madalena coyly leaves for Leroy as they pass in the Warden’s office, and in return Leroy gives Emilio the benefit of his experience in political agitation, helping him mount a case for underpaid and exploited Mexican workers.

Leroy, of course, softens. Of course he renounces his racist views. He falls for the Hispanic girl and thoughtfully acquires a wig of perfect hair for his genial Mexican cellmate. Redneck redemption and romance – it’s a beautiful thing. Not credible, nor particularly funny, but it must be beautiful – otherwise, what’s the point?