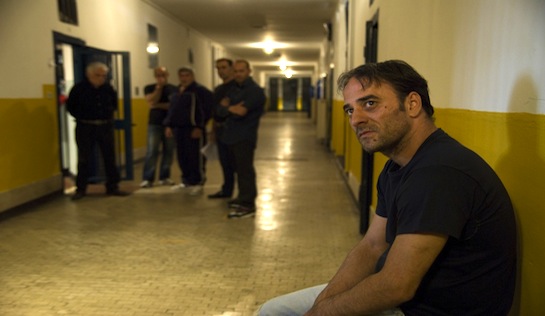 Shakespeare in prison. It’s been done before [Mickey B (2007), for example, or the Shakespeare Behind Bars (2005) documentary]. But never so well.

I’d understood Caesar Must Die to be a docu-drama; more documentary than drama. And while it’s hard to tell just how much of the film involves simply pointing a camera at a group of maximum-security prisoners in Rome’s Rebibbia Prison who audition for, and rehearse, a production of Shakespeare’s Julius Caesar – it seems that not much escapes the deft touch of its two octogenarian directors, Paolo and Vittorio Taviani. Which turns out not to be a bad thing.

Maybe the film’s greatest artifice is to cast Salvatore Striano in the role of Brutus. Striano used to be a prisoner, at least until 2006 when he was pardoned, and since then he has forged an acting career for himself and has appeared in other productions.  He was brought back to prison for this role, and while he may have found it easy to play the scenes of being locked away in his cell and rehearsing with his cellmates, they are no longer bits of his life that we see.

The other actors, on the other hand, were all serving prisoners at the time the film was made. And all long-termers: a murderer, several drug traffickers, Mafiosi, Camorristi. Some are superb; Giovanni Arcuri is imperious as Caesar, Cosimo Rega compelling as Cassius, and the interloper Striano is terrific as the most noble of the conspirators. Unsurprisingly, the themes of Julius Caesar – honour, ambition, power, loyalty, fate, betrayal, treachery – seem to resonate with them. And the irony of Mark Antony’s references to Brutus as ‘an honourable man’, are made even more deliciously poignant by being addressed to a cast made up of men from The Honoured Society.

I tend to watch prison movies for the prisons, and miss the subtleties of direction. Not here. The Taviani brothers’ hand in this film is evident in every scene, but is curiously welcome. Routine rehearsals are made powerful by them being staged at a barred upstairs window instead of a bland rehearsal room… or in a yard in front of raucous onlookers in their cells. Small reminders that we are in a real prison – here a spiteful confrontation sparked by Shakespeare’s words, there a sullen reaction to a bad visit – are beautifully orchestrated; the prison’s architecture lending itself beautifully to being a crowded public square or the Capitol. The film is wonderfully shot, most of it in honest, hardworking black and white.

After the play’s performance in front of an audience, the prisoners break into unbridled celebrations, like children. It reminded me of watching a group of armed robbers and thugs years ago, dancing around a cake like 6-year-olds at a birthday party; we glimpse the humanity within these men and cannot avoid the message that there is more to hardened criminals than their offences and criminal associations. Yes, it is art that has transformed them, but it serves too to remind them of all that they are missing: “Ever since I discovered art, this cell has truly become a prison,” says Rega as he is being finally locked away.

This is theatre at every level, with beautifully blurred boundaries between documentary and fiction, creativity and destructiveness, honour and dishonour. See it. 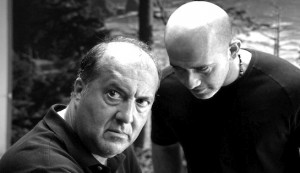 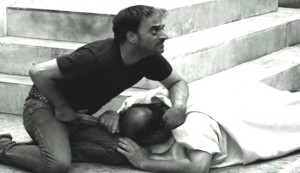