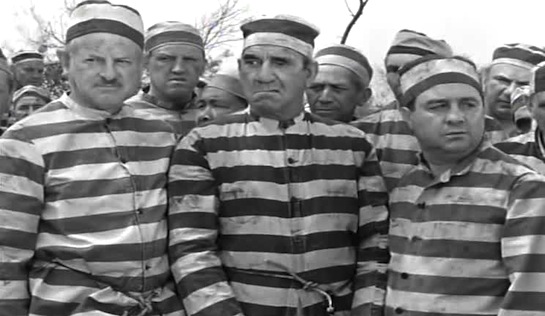 If you were a reporter who had gone undercover to expose brutality on in a chain gang, do you think that you’d be at all keen for your editor to publish stories and photos – that can only have come from you – while you’re still working in the prison? Not hugely keen, one suspects.

Cliff Roberts (Douglas Kennedy) finds himself in that rather awkward position. He’s a newspaper reporter working for the Evening Standard; his girlfriend Rita McKelvey (Marjorie Lord) works for the rival Chronicle. Neither of them are fans of the chain gang system, and when a reform bill is voted down by the Senate – ostensibly due to a lack of evidence of any abuses perpetrated by the gang bosses – Cliff decides to collect some evidence himself.

Armed with a microfilm camera hidden inside a cigarette lighter, he scams his way into a job as a chain gang guard at the Cloverdale Prison Farm, run by the ornery Captain Duncan (Emory Parnell). Duncan is, well… old school. He tells young Roberts, who has arrived at his prison purporting to be Jack Granger, a guard straight from the ‘newfangled’ Booneville Penitentiary: “We don’t go in for none of them high falutin’ prison reforms. To us, a con is a con. That’s how we treat ’em. Get me? They’re pigs. That’s all they are: pigs. They’ve got to know who’s boss. Never let them think you’re a softie or you’re licked. Use your club. Use your fist. Smack ’em down and you’re OK.”

There is, accordingly, a fair bit of smacking ’em down without much provocation. And, for the prisoners, tough working conditions, poor food, no contact with family, and barbaric sweat-box-type punishments. Worse still, they are seemingly forced to wear demeaning hats at all times and, as they are all chained together at night in their beds, prevented from attending to calls of nature until morning, even in emergencies. ‘Cruel and unusual’, arguably.

To fit in, Granger soon has to show his toughness or blow his cover. He reports one prisoner, Roy Snead (Bill Phillips), for lightening the load of another prisoner, Eddie, who has a sore foot. It’s an offence that warrants whipping, apparently. Granger is given the honour of being flagellator… which he does, a mite unwillingly. But then he guiltily checks in with Snead afterwards and gives him a sandwich and offers to send his wife and child a letter.

The Cloverdale chain gang is a hard-working, money-making chain gang, building roads for big business. The harder the guards work the prisoners, the bigger their bonuses from those who profit from their toil – including, unbeknownst to Rita, her father (who also owns the paper she works for, and we’re asked to believe that she didn’t know that, either). Granger meanwhile collects lots of evidence of abuse of prisoners, and files his reports and photos – which, extraordinarily, his editor publishes, causing great consternation in the offices of the Chronicle… and in the office of Capt Duncan.

Back at the chain gang, there is plenty more to worry about. A fire threatens the prisoners’ dormitory, but Granger heroically gets all the men out alive – all except the injured Eddie. And then there’s those pesky press reports… Granger’s colleagues are a bit slow to work out where these articles are coming from. When they do work it out, they rough him up, as if it might help their cause if they offer the Standard more reasons to push to have them closed down. And then Snead escapes, giving Duncan some excuse to shoot Granger in the shoulder, and our hero is forced to outrun and out-swim his pursuers with a bung arm to save his life.

It all ends happily, of course, with Cliff and Rita being reunited, Rita seemingly not in the least worried that her father is then indicted on charges of exploiting convict labour for personal gain. The film is silent on whether Cliff killed his idiot editor for unnecessarily placing his life at even greater risk, but we hope that if he did, he would surely have to go to that nice, newfangled Booneville prison, the awful chain gang having been shut down. 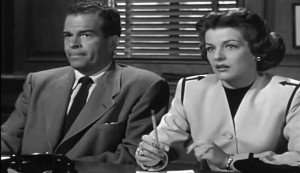 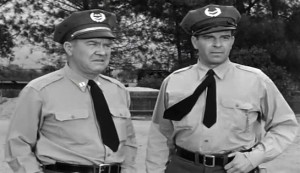