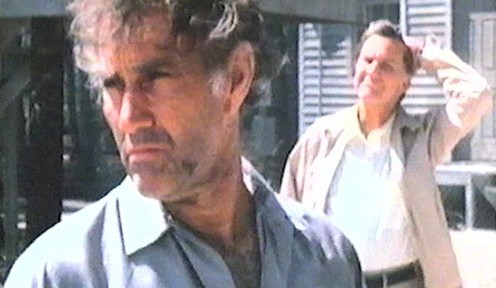 This is another Earl Owensby vehicle, following on from Buckstone County Prison [aka Seabo] (1978) – both produced by and starring Owensby as a strong, silent-type prisoner in movies that pay homage to Cool Hand Luke (1967). Without the charisma.

Edward Rafe (‘Mac’) McPherson (Owensby) is a knockabout out-of-towner who pops into a strip joint on his way to somewhere else. He doesn’t even get in the door before seeing a stripper-cum-hooker (who we know is trying to escape) being manhandled by one of the club’s goons. Mac belts the goon and he and the girl, Renee, flee in his rather distinctive car. It’s that car, parked at a motel down the road, which makes it awfully easy for their pursuers to track them down. On instructions from their boss, Trent Loman (Leon Rippy), they break into their room, knock Mac out, kill Renee, and leave the police to charge him. Mac, despite evidence that his motel room door had been smashed through from the outside, is unable to convince the jury that his account is anything other than fanciful, and he is convicted of the murder and sent away for 15 years… to the Black Creek Correctional Unit.

Black Creek gets its delivery of new prisoners by boat, as if it were on an island, but cars seem to have no problems getting there either. Maybe it’s a little swampy. It is a standard chain gang camp (i.e. very similar to the one in Cool Hand), with a miserable warden, Harry Bates (Don Law), and a troop of brutish, bullying, gun-brandishing guards, led by the particularly nasty Miller (Robert Bloodworth). At least they’re not wearing reflector sunglasses.

The chain gang does traditional chain gang-type slashing work, but in a cosy arrangement also performs maintenance work at a local establishment (conveniently owned by the same crime boss, Loman), which provides sexual services to a clientele comprising largely of state and other officials. One curious prisoner, Freddy (Mark Allan Ferri), sees a little too much of what goes on and is promptly taken out into swampland by Miller and eliminated… but not before he confides to Mac what he fears might happen to him, and why.

Mac, understandably keen to get back at Loman for framing him over that little murder episode, resolves to expose the whole show. And if we need a reason to dislike Loman more intensely, we see him treat his supposed girlfriend, Renee’s grieving sister Skyler (Carol Bransford), with sheer contempt, offering her services to a business associate to whom he is indebted. Mac engineers a place on the work party at the brothel, where Skyler catches him going through Loman’s papers in his unlocked office. But Skyler is oddly sympathetic to her sister’s supposed murderer, having had some doubts about his guilt already – and when the guards burst in, Mac and Skyler fight their way out (incriminating records in hand) and escape.

Guards with semi-automatic weapons chase them through the brothel (where there is lots of indiscriminate shooting through flimsy bedroom walls), in cars and then on foot, through woodland and creeks, spraying hundreds of rounds all over the place until one unluckily finds Skyler and fells her. And then Mac, too, is apprehended after surrendering himself to the Sheriff and telling him his sordid tale of official corruption (to no avail)… but not before he has shot one guard dead, impaled another with similar effect, and left Miller badly wounded and unconscious.

And this is where it gets a little tricky. Or trickier. Whereas Cool Hand Luke’s Luke was a minor offender who was a little prone to escaping and was dragged back to the camp for further punishment and to be made an example to others, Mac is a convicted murderer who has just killed two guards while on the run. They’re not the sort of crimes for which you might bring him back to the chain gang, add some shackles and make him spend some time in the box. Indeed, given that Warden Bates and Miller had no compunction about liquidating poor Freddy, it’s hard to see why they wouldn’t summarily bump off Mac, too, rather than bring him back. But bring him back they do.

After surviving forever in the box, a predictable revenge beating and other humiliations (is this sounding vaguely familiar?), Mac leads an armed revolt, with more guards and prisoners killed than eggs Luke could ever eat, leading to a massive final showdown between Mac and Loman. It matters not a whit that most of Mac’s friends die in his attempt to seize control.

I must admit, I enjoyed this more than it deserved… due to the cheesy 80s vibe, I think, and the fact that I’d had a bit of trouble tracking the film down. Because the acting is not great (Owensby being characteristically wooden), the story is implausible and derivative, and the marksmanship appalling. But then again, there is also a slightly different prisoner ensemble, including a tiresome religious proselytiser Gideon (James Eric), the bullied, overweight Chandler (Paul Holman), and a decorated ex-Army man, Kelsey (Terry Loughlin).

And who can resist an imprisoned innocent man taking on the system? Well, with hindsight, probably all of his fellow prisoners who became collateral damage. But apart from them? 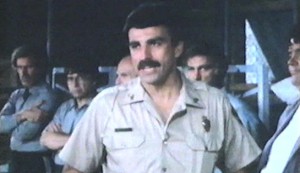 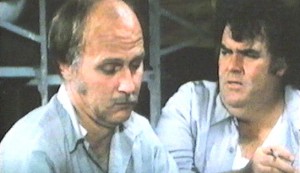