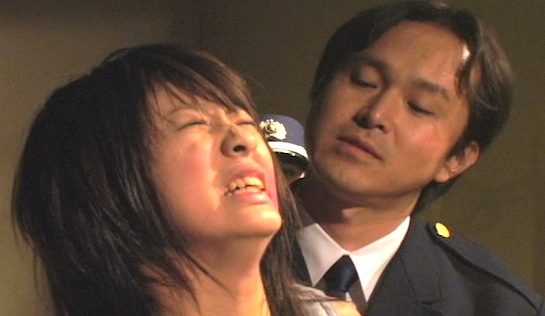 Nami Mizushima (Yuka Kosaka) is a determined young woman, intent on revenge. Innocent and framed by her prosecutor boyfriend over his killing of his lover, she is so controlled she remains continent after three days in a completely blackened room with her hands cuffed behind her back.

She shares a cell at the Yugoko Prison with four other murderers, all of whom have been betrayed by men. Azusa, the leader, is a yakuza girl who has killed twice. Masako killed her abusive husband whose violence towards her forced her to lose a child. Junko is a nurse who mercy-killed a patient with whom she fell in love. And Risa killed her husband’s lover.

Nami’s former boyfriend, Kyosuke Kagami, is a powerful young man with an even powerfuller father. He asks the prison warden, Aihara (Junichi Kawamoto), to make life so difficult for her that she will abandon any idea of an appeal. Aihara, when he is not being fellated through his underwear by his favourite prisoner, Yuko (Anri Suzuki), obliges. He enjoys using electric prods on half-naked, tethered prisoners, and gives licence to his chief tormentor, a tall woman in a short skirt, to inflict all manner of beatings on Nami… and to have her placed in The Darkness for three days on being found with a hacksaw blade planted by the multi-skilled Yuko. He also offers to stop the torture if Nami is prepared to become his next favourite prisoner.

Of course, all this does is strengthen Nami’s resolve to get out and seek vengeance. She is ably supported by her cellmates in Cell 42, with whom she had made a rocky start but who have become sympathetically disposed towards her after seeing the brutal treatment to which she is subjected. They create enough of a diversion to allow Nami to escape while exacting an entertaining bit of vengeance on the good warden on her way out.

Chain Gang Girls is a colourless, unimaginative affair: a wronged woman, a brutal regime, rival gangs and a corrupt and lascivious Warden. It contains some of the most extraordinarily tedious sex scenes imaginable (on the warden’s desk), and tries some increasingly desperate modes of torture (culminating in a red-hot pinch bar applied to the genitals) to inject a little life into the movie. But it is very much a paint-by-numbers script played out in a dreary film set prison.

Oh, and there is no chain gang. Unless you count the chains by which the women are restrained during torture, but that surely would make it a chained gang.