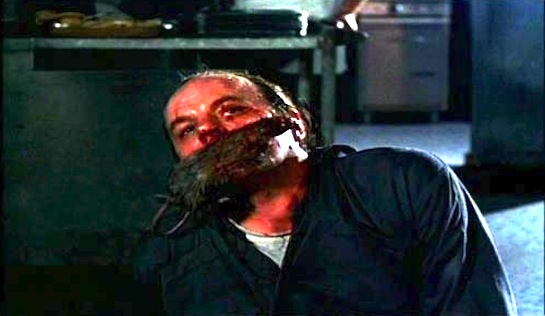 OK.  So it’s a tad unlikely (even if, in a case of life almost imitating art, a similar rehab program was introduced in a Canadian prison not so long after Chaindance was released). But perhaps its implausibility shouldn’t matter. Trouble is, it does.

With budgets tight, an overburdened disability service embarks on an experimental prison program – against the wishes of the warden of its local federal penitentiary! – to engage five prisoners as personal carers for five of the centre’s residents.

The plan is that the program will both overcome staff shortages at the centre and rehabilitate the prisoners by instilling in them care, selflessness and responsibility… all while they are chained to the wheelchairs of the disabled men. Hmmm. If you can put those minor things aside, it’s an interesting concept.

JT Blake (Michael Ironside) is our main man. He’s loyal, taciturn… and angry. He’s a car killer – doing a stretch for shooting up the car of a police officer who has just availed himself of the services of a hooker of whom Blake is fond. And when Ilene Curtis (Rae Dawn Chong) from the chronic care centre identifies him as one of the prisoners whom she wants on the trial (without actually speaking to any of the men concerned, it must be said), he makes it known that he isn’t interested. Naturally, he’s selected anyway.

He is paired with an intelligent, strong-willed cerebral palsy sufferer, Jonathan (an excellent Brad Dourif). The relationship between the two men predictably does not start well. The prisoners get no training, other than to be told that the residents’ needs always come first. Blake struggles with assisting Johnny (as he is known) with toileting, eating, and everything else.

But he struggles more with one of his fellow prisoners, Casey (Bruce Glover), a nasty ex-union boss who is doing time for embezzlement and has way, way too much pull in the prison. Casey orders the guards to give him access to a younger prisoner, James (Scott Andersen), whom he rapes. Blake is unimpressed, and alerts the authorities.

Casey is tipped off that he is going to be charged over the rape, and decides to escape before the cavalry arrives. When he is found rifling through the centre’s cupboards (picking out a baseball bat – arguably an odd piece of sporting equipment for a severely disabled persons – as a combined weapon and chain breaker), Blake and Johnny manage to foil him… and forge a new, closer bond as a result.

Casey’s mates back in the prison are, in turn, unimpressed with Blake. Very. In a memorable scene in which Casey’s henchmen make their boss’s displeasure known with the encouragement of corrupt staff, Blake finishes with a dead rat stuffed in his mouth. The authorities decide that they can’t keep Blake safe in the jail, so transfer him to a house in the community (where they surprisingly elect not to chain him to his bed), and make him Ilene’s assistant.

With Blake less sulky and Casey out of the way, the tension ebbs… until, during a high-risk outing in which Blake arranges for Johnny to lose his virginity, Casey returns, having escaped from prison! This is fortunate as there could clearly never be sufficient drama in the mere transformation of prisoners into citizens who find a sense of worth in helping others.

Chaindance has its moments. It bravely takes on a theme of prisoner redemption, but is not so brave that it allows itself to dispense with many of the symbols of the conventional prison movie; some of it – including its climactic ending – is just silly. Which is a bit of a shame. 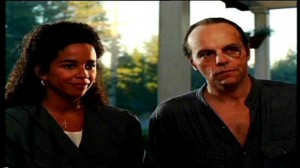 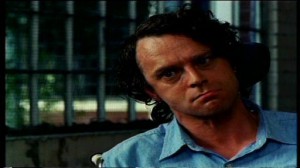