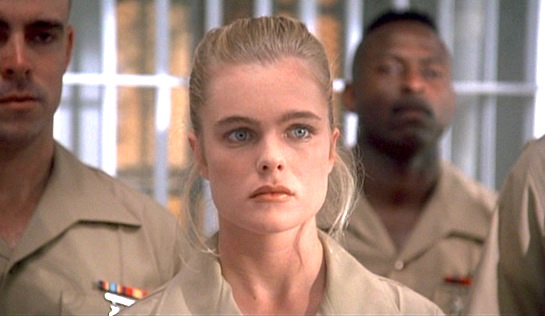 If there were no The Last Detail (1973), this might seem like a different prison-ish road movie. As there is, it’s maybe not so different.

Like The Last Detail, the story involves two Navy men escorting a prisoner from one place of detention to another. The two naval men are as different as comedy dictates they must be: Rock Reilly (Tom Berenger) is a crusty veteran and Eddie Devane (William McNamara) a smooth, cocky youngster. Neither is happy; Reilly resents having a young punk assist him, and Devane is due for discharge on the following day, and all he can think about is his new Porsche that he is set to buy using money he has pilfered by selling off Navy stores.

The Navy men arrive to pick up Tony Johnson from the Marines at Camp Lejeune, only to discover that the prisoner is a very attractive Ensign Toni Johnson (Erika Eleniak), serving seven-to-ten for going AWOL to visit her ailing drug-addicted brother… and attacking a Shore Patrol officer with a tyre iron. The otherwise rule-bound officers all happily overlook the requirement that for women prisoners at least one of the escorting officers has to be a woman – on the basis that Devane had already signed for her custody.

And, of course, that’s where the fun begins. Not far into the journey back to Charleston Johnson insists that she has to use the toilet, and – with some pre-arranged help from a waitress at the diner where they pull in (how did she organise that, you might ask) and ignoring the large louvred window through which she could escape with ease – walks out past Reilly, flirting as she goes, into a waiting car… which she crashes and from which she is recaptured.

Next she insists on a stop to buy tampons, and escapes again when the van breaks down after she drops some of them into the fuel tank. Later, at an unscheduled overnight stop while the van is being fixed she seduces Devane (or maybe it is the other way around) and, handcuffless, leaves him in post-coital reverie. Again her driving ability lets her down; what is it with these otherwise competent women drivers?

The prospect of further gender-based japes weighs heavily on the remaining action; one senses that an awkward incident of nipple-rash or thrush is just around the corner, inciting more embarrassment for the SPs. But thankfully the plot avoids those things and there are some less-expected developments; that Devane falls in love with her is not one of them.

I’m not sure whether this qualifies as a prison movie; I think not. It could, however, be used as a manual for how not to conduct a prisoner escort. 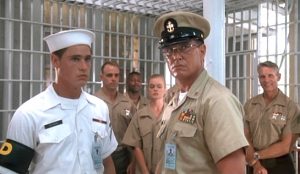 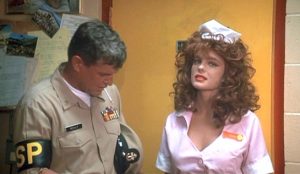 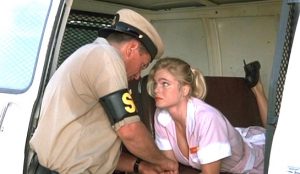 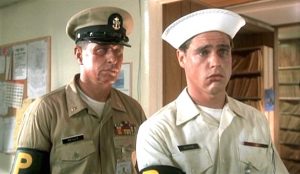