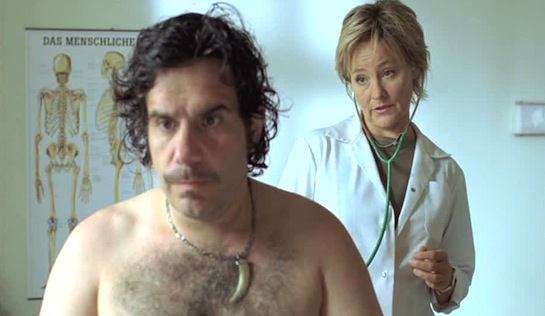 Roby Schmucker (Bruno Cathomas) has found himself back in jail, again. He is awaiting trial on a ‘heavy’ robbery, and on Day 1 in the mess room is confronted by the prison’s top dog, African-Swiss Charles ‘Chief’ Müller (Kyle Popooda). Schmucker doesn’t appreciate Müller’s welcome and makes some unkind comments about his ethnicity. It’s not received well. One of Müller’s men spits in Schmucker’s food, onto which Müller then empties an entire salt cellar. Schmucker sticks it out for another mouthful or two but then launches into a face-saving rant: “Chicken Mexicaine! This muck’s called Chicken Mexicaine!” before reminding everyone that he’s an old hand. It’s a quirky, off-beat title for one of the wackier, more off-beat prison movies.

Schmucker hasn’t a lot going for him. He once had a wife in Gabon from whom he is now parted, and a daughter with whom he has lost all contact. He is a chain smoker, overweight, and prone to a melancholic lack of insight and self-pity… traits that the prison doctor, Helen Berger (Juana von Jascheroff) reminds him of at regular intervals. He’s a bit of a loser.

He cops a 12 year whack once convicted, but is not keen on doing the time. He trades some drugs (destined for the Chief) that virtually fall into his lap for a chance to join Müller in an imminent escape bid. After a novel diversion, created by fellow prisoner Thomas Morell (Marcus Schäfer) swinging and throwing a cat, the prison – acting on a tip from Morell – foils the break, using it as a routine training exercise.

While he is comfortable on his own, Schmucker forges a strong bond with his cell-mate, a North African marriage swindler (and the prison wheeler-dealer), Mohammed Hiab (Oliver Zgorelec).  And a different sort of bond with the straight-talking Dr Berger, with whom he’d like to blur professional boundaries and to whom he entrusts all his secrets.

And he does have one big secret. He learns that Felix, the son of the prison’s Director, Johannes Schwerdfeger (Peter Rühring), has gone into partnership with an influential Russian prisoner to extract psychoactive substances from the mushrooms the prison is producing commercially, and is producing ‘get-happy’ pills in the prison’s cellar.

Schwerdfeger is a very hands-on sort of Director. But his prison is due to close, and he has a scandal on his hands. He’s also a bit exposed after letting his son into the prison for no good reason, and a bit fearful that Felix will drop him in it if anyone spills the beans. He promptly breaks up the drug lab, transfers the Russian Rabowski, releases Hiab to Morocco, and allows Morell to ingest a fatal quantity of the cellar’s produce. Schmucker knows that Schwerdfeger’s vulnerability presents another opportunity to secure his freedom if he can just cut a deal…

Aside from being run by a Director whose son is manufacturing drugs inside the prison, it’s a rather unusual prison. For a time it houses three llamas. It boasts an extraordinarily large collection of human bones, which Dr Berger asks Schmucker to catalogue. And aside from that burgeoning underground mushroom farm, its principal industry appears to be coffin making.

Its regime is relaxed and its discipline arbitrary. Schmucker has some porn mags removed from his cell, but Morell has an inflated blow up sex doll in his, which is apparently acceptable. Schmucker doesn’t get punished for trying to escape, but does for barricading his cell after getting a letter saying that his ill daughter was sent to an aunt three years earlier and hasn’t been heard of since. Müller doesn’t get punished for either attempting to escape with a hostage in tow at knifepoint, or beating up the cat-hurling Morell… who doesn’t get removed from the general population after getting beaten up, or even when he’s identified as ratting on the escape plot or when he gets stabbed by Schmucker. Who doesn’t get locked up for that, either. When staff forget to lock Schmucker away in his cell on New Year’s Eve, and he stumbles (high on mushrooms) into the staff celebrations, not even Schwerdfeger appears terribly concerned.  I’m still not sure whether the regime is in any way indicative of Swiss prisons, but think it’s more likely to be indicative of Swiss farce.

This is an odd film. If it were odder (and a little less jarring, perhaps) it might even attract a cultish sort of status. 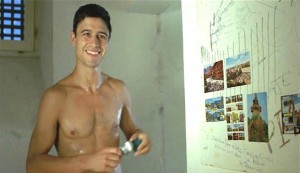 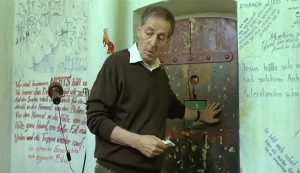 One Response to “Chicken Mexicaine (2007, Switzerland)”