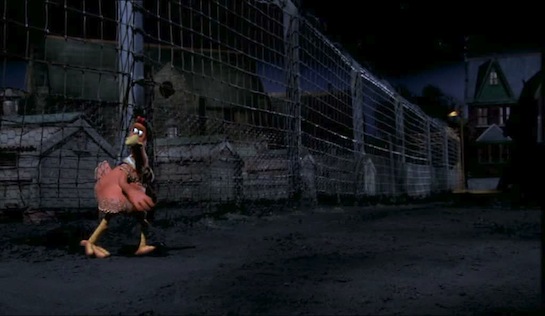 This is on so many ‘best prison movies’ lists that one could be forgiven for thinking that it is a prison movie. It is, however, clever, witty and empathic… which all but exclude it from sensible consideration as a prison comedy.

Ginger (voiced by Julia Sawalha) is the star of Tweedy’s chicken farm. She is savvy; savvy enough to be able to regularly escape from the stalag-like compound, where if you don’t produce enough eggs, you are destined for the chopping block. But rather than flee and be free on her own, Ginger wants all her fellow chickens to be at large with her… yet they are on the whole less restless than she, more content with their lot, and incompetent escapers.

When Rocky the flying American rooster (Mel Gibson) literally drops in, Ginger hopes that he will be able to teach them all to fly out of their prison. There is much excitement until the chickens learn, belatedly, that the swaggering Rocky can only fly when shot out of a cannon; he skulks away in anticipation of disgrace. Now, the plodding Mr Tweedy has always sensed that the chickens are up to something, but can’t prove it. Mrs Tweedy, on the other hand, will not entertain the notion that the chickens are capable of organising themselves for any purpose, but she does get enticed by the notion that they are capable of being chicken pies – and invests in a big, automated pie-making machine. Rocky redeems himself by returning to save the smitten Ginger from a doughy demise in the pie-maker – a late but timely intervention that might just mirror the US involvement in WWII. The chickens’ final bid for freedom is every bit as audacious as The Great Escape (1963) or The Wooden Horse (1950), but much sillier.

It’s a joyous film. It’s very 50s England with some quintessentially British characters (the ex-RAF rooster, Fowler, voiced by Benjamin Whitrow, being my favourite), and plenty of references to 40s Europe – Stalag 17 (1953) and other escape-from-prisoner-of-war-camp movies. Full of wit and whimsy amidst the darkness of a harsh, prisonesque regime. 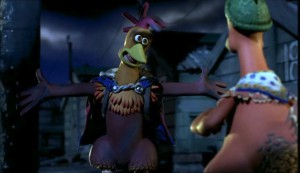 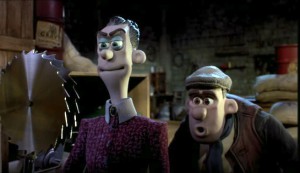