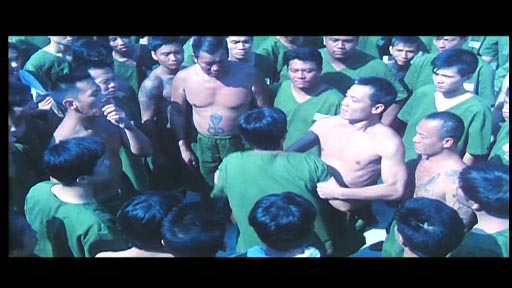 Fortunately, the plot itself is not so bewildering. Ahn (Tony Leung) is a 1960s investigative reporter who runs a few stories about a crooked cop, Inspector Chiang Yiu Joe (Ben Ng). His exposés are not appreciated. Joe has him sacked, frames him on drug charges, rapes his nightclub-singer girlfriend, Jess (Pinky Cheung) before handing her over to his cronies, and threatens to harm Ahn’s family if he fights the frame-up.

The ‘righteous’ Ahn pleads guilty, and quietly cops three years. After the obligatory settling-into-prison challenges (a cavity search, being on the receiving end of some ritualistic initiation punches, and an attempted rape-in-the-shower incident), he gradually asserts himself within the prisoner group. Brave and a bit brighter than most of his colleagues, he speaks up on behalf of his fellow inmates – but not always, it must be said, with success. He does, however, have one advocacy triumph – winning a major concession from a visiting politician: Underwear for everyone! This makes him something of a hero, even amongst the influential (and itchy) triad members.

In addition to from the epic underwear victory, there are a number of features which distinguish Chinese Midnight Express from any other prison movie I’ve seen – and I’ve seen one or two. They include:

? all the staff wear Bombay bloomers, which might be seen to undermine their authority were it not for the fact that they also wield the odd rattan and murder a prisoner, which makes them less likely to be objects of mirth;
? an unpleasant institution known as the ‘urine-frame’, in which triad members call upon lesser prisoners to convey them, on their shoulders, from their top bunks to the toilet. Rather than dismount, the carried relieve themselves from up high while the unfortunate carriers are forced to contend with splashes and dribbles;
? after Ahn challenges a decision of the nastiest guard, known as Inhuman (Ben Lam), he is forced to drink tea sprinkled with pieces of another prisoner’s hair, a ploy which has the intended effect of making him gravely ill; and
? the prisoners get back at Inhuman by eating his dog.

Meanwhile, Jess enlists the help of another (slightly less) corrupt cop, and succeeds in having the more-corrupt Inspector Joe set up on a rape charge. In doing so, Jess and Ahn might relinquish some of the high moral ground, you would think, but we’re not encouraged to see them as any less righteous.

The newly-convicted Joe duly finds himself in the same jail as Ahn, which naturally leads to more shenanigans… and after that Ahn has even more avenging to do. It may be that all this avenging makes him so tired that he hasn’t the energy to catch the Midnight Express.

This film is in many respects pretty standard Hong Kong movie fare; a predictable storyline with a good dose of quirkiness. It’s the quirks that make it worthwhile.

Thanks to Mr and Mrs Mel Lan for finding this little treasure for me, filed under Hei yu duan chang ge zhi (Qi zheng shu rou), in a righteous-loving Hong Kong store.