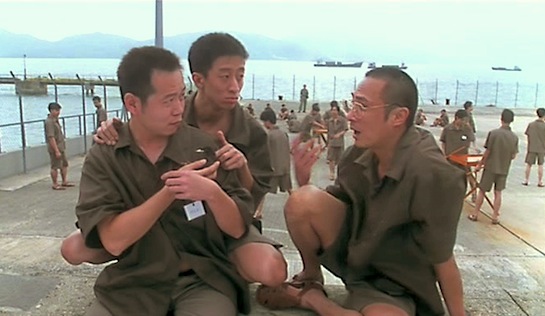 This bears about as much connection to Chinese Midnight Express (1997) as that movie bears to the original Midnight Express (1978). Like CME I, however, it is supposed to be set in the 1960s. Not that there is anything really of the sixties about it (other than one prisoner with a short-lived Beatle haircut), but it does allow the filmmakers to pretend that this depicts the treatment of prisoners in the bad old days, rather than risk incurring the Government’s wrath by suggesting that any nastiness could still occur in the more enlightened nineties.

Chan Siu Hong (Francis Ng) is a barrister who finds himself in jail after hitting a vicious policeman – who is intent on spoiling a post-court acquittal celebration – over the head with a bottle. He cops nine months. Unfortunately, the policeman is the nephew (or cousin, depending on which translation you prefer) of the prison’s Superintendent, Piranha (Jimmy Lung Fong).

While he is not popular with Piranha, Siu Hong is admired by the other prisoners, having championed many defendants’ cases in court, and so is spared the normal treatment meted out to first-time prisoners. Naively, he treats prison a bit like a courtroom and objects to unfair treatment whenever he sees it. He even intervenes in disputes, advocating – of all things – non-violent resolutions. He receives some unofficial corporal punishment from the warders for his trouble.

Of course, no formulaic prison movie is complete without a roll-call of oddball characters, and this is no different. Brother Hong’s fellow prisoners include a corpulent, good-natured top dog, Jelly Fish (Sek Yin Lau), a mentally-ill man, Fairy (Tats Lau), who offers the cryptic “An observation: torn trousers can often be mended” to everyone he encounters, and another prisoner, Chicken, who carries a raven on his shoulder until being shamed about taking its freedom without its consent. And then there’s the novice warder, Shing (Peter Yung), who is green but compassionate and earnest… and who takes a shine to Siu Hong’s younger sister, May.

The film tries to show off its realism credentials early in the piece, with fleeting depictions of drug taking, couples, the forcible extraction of drugs from a prisoner’s rectum, and transactional sex – all of which are never seen again. But we do get to see good guys, bad guys, gambling, thievery and even some literal gallows humour.

But the dramatic turning point is when the normally-amiable prisoner Reddie (Samuel Leung) – whose acquittal Siu Hong was celebrating on the fateful bottle-smashing night, and who looked after Brother Hong in his first days in prison – can take no more of Piranha and makes a wild attempt at stabbing him. Piranha and his sergeant are not generous in their response; they beat him to death. The guards cover up the cause of death and immediately decide on a show of strength by subjecting the angry prisoners to a shakedown – an ill-judged tactic, one would have thought, likely to make angry prisoners really angry.

Now, the loathsome Piranha had also feigned an interest in Siu Hong’s two sisters, meeting them outside the prison. As the prisoners reel from news of Reddie’s death, it is also revealed that the Super had extorted money from, raped and then blackmailed the older of the sisters, then drugged and raped the younger – who then hanged herself. The prisoners are now really, really angry and Piranha taunts them even further, assaulting them and throwing water in their faces.

This brings about the expected riotous response from Siu Hong, Shing (who demands that Piranha stop maltreating the prisoners and tosses in his job), and the other prisoners… with not unpredictable results. Piranha comes to a nasty end on the gallows.

The sinister guard is a feature of many prison movies. The well-meaning guard throwing his lot in with the prisoners, rising up against against authority, and receiving a  life sentence for his troubles is not. This is an unusual prison flick, and a mildly entertaining one. 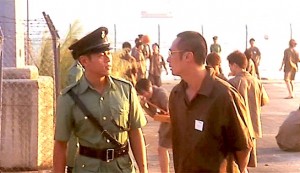 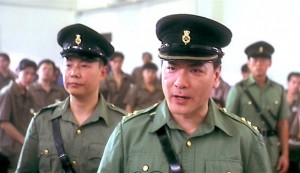 Also known as ‘Hak yuk duen cheung goh II miu gei tiu ying’, but I have no idea what that translates as.