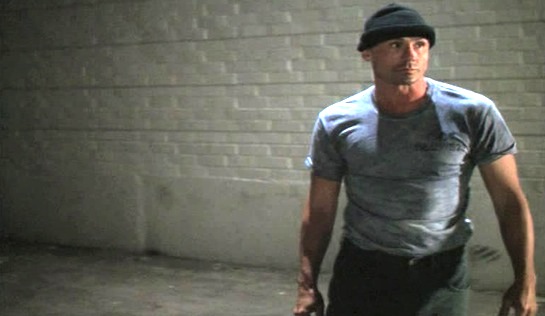 Also known as The Circuit 2: The Final Punch. Except it’s not the final final punch – the temptation to make Circuit III being just too great.

Dirk Longstreet (French kick-boxer Olivier Gruner) is a high school teacher about to propose to his girlfriend Nicole. She’s a journalist doing some top-secret investigative work on a Fight Club operating out of the local Ogden Correctional Institution, filming bouts from her car in the early hours of the morning. It doesn’t matter that there’s no way she could see into the prison from where her car is parked; she is spotted, taken into the prison at gunpoint, and deposited in a cell with hulking prisoner Pike Roberts (Jim Schagen), who rapes and almost kills her. She is dumped in an overflow channel and is comatose when found, days later.

After a quick bit of forensic work to find out what story she was working on, Dirk, a former kick-boxing champ on the East Coast circuit, visits one of his students, Dermot (Lovake Heyer), who is awaiting trial at Ogden and is able to confirm the Fight Club’s existence. Dirk decides to go into Ogden himself to seek justice for Nicole. With the help of her martial-artist editor, Max (Lorenzo Lamas), who uses a prison guard contact to get Dirk added to a group of prisoners being transferred to Ogden from Gilmore Penitentiary, Dirk goes undercover into Ogden as Jim Morrison… leaving his fiancée-to-be in hospital, still critically ill, still in a coma, and somehow a survivor of yet another attempt by Pike (sneakily let out of prison) to kill her, this time in her hospital bed.

Ogden’s whole purpose seems to revolve around the Fight Club. The prisoners’ daily routine appears to be to work out on the rooftop during the day, and then return there at 2.00 or 3.00 in the morning to fight in front of other prisoners. It’s possible that by daylight they are too tired to go to work or do other things.

Max’s contact at Gilmore has proven to be surprisingly thorough. He has made up a whole file for Jim Morrison that includes a note that Morrison was a kick boxer, which naturally attracts the attention of Warden Jonathan Biggs (Shaun T Benjamin) and his head guard Baxter Kressler (Gary Hudson). Morrison is immediately added to the Fight Club roster. He fights and wins, fights and wins… but bewilderingly doesn’t try to avenge Nicole’s near-death. Then his cover is blown; Pike squeezes the truth about Morrison’s true identity out of Dermot, and then kills the boy. Dirk bides his time; it is obviously too early in the film to avenge Dermot’s death, too.

He gets another chance when Warden Biggs sets up a fight competition against prisoners from Gilmore Penitentiary. The fights are to be held – where else, but the beach… lit by tiki torches. They start in darkness, but by the time Dirk finishes his epic, much anticipated fight against Pike in the surf (with more escaping prisoners shot dead and the guards and audience being rounded up by police), it is broad daylight. I could not possibly disclose who wins.

Quite apart from its Fight Club, which seems to sustain itself with no audience and a never-ending supply of prisoners willing to be maimed or killed, the prison boasts a range of intriguing features. It is somehow able to avoid any real scrutiny of its alarming security record (every prisoner killed in the fights is reported to have been shot while trying to escape), it has one of those speed visit programs (Dirk’s visit with Dermot is terminated after just 46 seconds), and every post in the prison is manned by an armed guard or two, waving their shotguns and rifles around prisoners, apparently oblivious to any risk that the weapons might be wrested from them. So tough is this prison that there is even a gun-wielding guard on the visitors’ side of the visit booths. 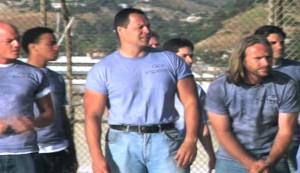 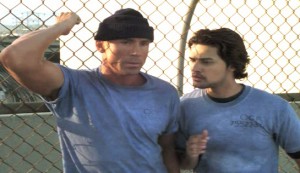