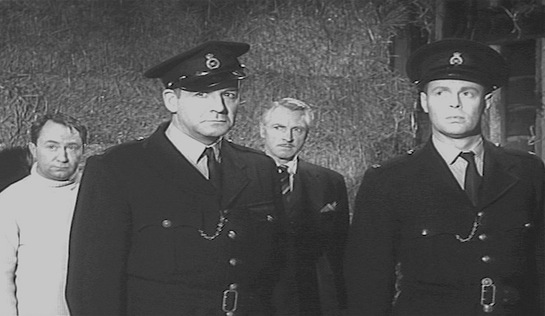 Clash by Night is not exactly a prison movie, but it is all about prisoners and Prison Officers. So it’s prisonny.

Not that much of it is recognisable; the film transports us to a very different time where all the prisoners are Anglo-Saxon, none are drug users (or even alcohol abusers), and there is not a tattoo in sight.

One of those prisoners is Martin Lord (Terence Longdon), a poultry farmer who is possibly the most unlikely farmer you will ever see, maybe because he speaks a bit posh and is always wearing a suit and tie. He is wearing a suit and tie when he returns home from a day in London to find his Carnaby Street-dressed poultry farmer’s wife, Nita (Jennifer Jayne), being attacked by a stranger. He punches the man, who hits his head on the hearth and dies. Back in a suit and tie again for his trial, Lord gets five years… and accepts his fate with bizarre equanimity instead of bitterly cursing the only jury in the world that would convict him.

He is joined on a prison bus taking him to a new prison by five other newly-sentenced prisoners: Doug Roberts (Harry Fowler), a proud thief to whom he is handcuffed; ex-British Army Major Ronald Grey-Simmons (Alan Wheatley), who naturally enough has been convicted of major fraud; Sydney Selwyn (Mark Dignam), a middle-class religious zealot who is said to have taken “brotherly love a bit too far”; Victor Lush (Peter Sallis), a paranoid schizophrenic who has been charged with attacking a girl but would also seem to have killed his mother; and Bart Rennison (Tom Bowman), a gangster who looks as if he has stepped straight out of a film noir from the 1940s.

They don’t get far. The bus is diverted off the main road by Rennison’s gang and into an old hay barn which has been soaked with paraffin. Rennison is duly sprung, the more experienced of the two Prison Officers, Mawsley, is shot dead for recognising one of the springers, and the rest are told that if they try to escape two other members of the gang will set the place alight.

Tension, of course, ensues. It is Guy Fawkes Night and a stray firework could land on the roof and incinerate them at any time. The remaining Prison Officer, Danny Watts, is seen by some of the prisoners and the bus driver, Ernie Peel (whom the prisoners quickly twig is probably in on the whole show), to lack decisiveness and leadership. Recriminations and strategies are tossed about… and then Lord, whose farm is close by and who just happens to know the barn well, lets Roberts know about a secret door. They sneak out; Roberts with the intent of fleeing to the continent, and Lord to see his wife one more time and to wait there until he is rearrested.

They pop in to see Mrs Lord, just after the Police have been there – first alerted to the escape by a car crash during an unconnected police pursuit in which Rennison died – but, after a cuddle (Lord) and a bite to eat (Roberts), they decide to return to the barn; Roberts having lost his nerve and Lord keen to avoid an extra year on top of his sentence for escaping.

They get back just in time; the sad, psychotic Lush has set the barn alight and Lord and Roberts are able to lead them all out to safety – other than the driver, who found the secret door and ran straight to the Police to try to shift suspicion away from himself, and Lush, who returned into the flames to retrieve a bunch of make-believe primroses.

It is really a rather jolly action movie, despite the odd bits of collateral damage. Nearly all the prisoners are treated sympathetically: Lord, of course, is a dutiful, loving husband and desperately unlucky to be in prison, Roberts is an inherently decent if incorrigible ‘tea-leaf’, the toffy old Major is burdened by a horrible, grasping wife, and everyone agrees that Lush shouldn’t be in prison. The Prison Officers are a decent lot also, if not the brightest. The Police are decent and very good at their jobs. And the stylish Nita very decently offers Roberts all her cash, and then a job when he gets out of prison, three and a bit years before her husband. And it ends pretty decently, eh what?

It’s not a film that, 50-plus years later, you could imagine being made. Or made in the same way.

* also known as ‘Escape by Night‘