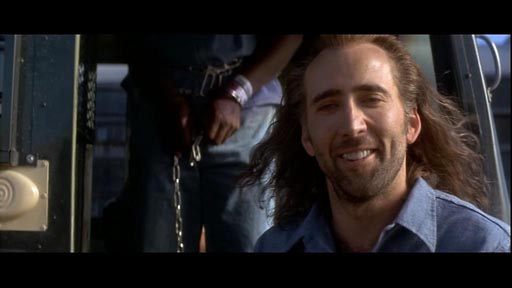 Mildly entertaining action flick that starts with the hero Cameron Poe (Nicolas Cage) absurdly copping a 7 year whack for manslaughter while defending himself and his pregnant wife in a fight against three men, and gets more preposterous from then on.  He serves his time and is required to fly back home on a prison plane with a collection of caged psychopaths being transported to a new high security prison.  Oh oh.

The psychopaths, led by ‘Cyrus the Virus’ create a diversion, break free, kill most of the guards and take over the plane. Poe understandably passes up the chance to go home to his wife, deciding to stay on board so that he can single-handedly (i) get medical attention for his mate who is about to fall into a diabetic coma, (ii) protect a female guard from the attentions of a serial rapist, (iii) save the guards who have been taken hostage from execution, (iv) convince the DEA agents not to blow the plane up, and (v) work with the authorities to bring the plane down safely and administer justice to all.

As a lesson in emergency management, it lacks something.  For starters, of the three men who know what’s happened, two are feuding, one follows the plane by car and the other two jump into helicopters, leaving no-one to coordinate what needs to be a reasonably carefully planned response.  When the plane finally lands in the crowded streets of Las Vegas and Cyrus escapes in a fire engine, Poe (winged by a bullet) chases him and, just as ‘the Virus’ comes to a messy end, he catches sight of the stuffed bunny he was going to give as a birthday present to the daughter he has never seen, and it seems less silly than the rest of the movie.

I don’t know why I can’t enjoy action movies. 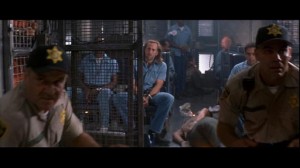 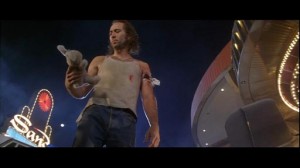