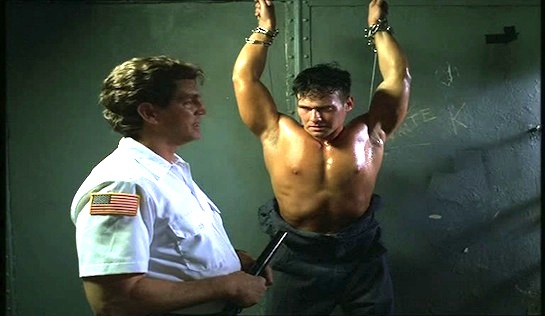 As the opening credits of Con Games roll over, we see a prisoner being led into a cell (in order that he might be raped by a waiting prisoner, it turns out), and the cell door doesn’t have a locking mechanism. Maybe such details are unimportant. But it doesn’t augur well.

John Woodrow (Tommy Lee Thomas, who is burdened with the additional shame of a co-writer credit) is a Gulf War veteran who is persuaded to go undercover at Doscher State Prison to find out why there have been 11 deaths in the past year. The venture is sponsored by Senator Whitmeyer, whose grandson Allen (who had been serving a sentence for raping a 15-year-old) was one of those murdered. The senator promises that if John can get to the bottom of it, his father (also in jail for murder, as it happens, but protesting his innocence) will be released.

John assumes the name of Wilson in jail and immediately makes himself an object of suspicion by looking exactly like a first-timer trying to be tough… and asking too many questions (about a presumably reviled child-rapist, no less). His opponent on the side of evil is the dastardly Lt Fred Hopkins (Eric Roberts) who controls the drugs, controls the biggest and nastiest prisoners, and is sensibly suspected of being behind the murders.

The plot is not unknown in prison movies: corrupt guard enjoins other guards and prisoners to work corruptly; finds himself pitted against the innocent hero. The only twists along this well-worn path are the number of Government agents who successively also prove to be corrupt. Indeed, the only people whom John can trust in the end are some of his fellow prisoners and, (who would have thought?), his beautiful handler and obligatory love-interest, Ashley Stephenson (Amy Fadhli). I know that it will come as a shock, but it ends happily, ho-hum scenes of torture, escape and bloodshed notwithstanding.

Tommy Lee Thomas’s main claim to fame seems to be that he looks good with his shirt off. He certainly can’t act, but then nor can any of the others; the bulk of both the guards and the prisoners all seem to have mistakenly wandered on set on the way back from a bodybuilding session. I would not have thought that the unemployment rate amongst actors in LA was so low in 2001 that the producers could find only one or two people capable of saying their lines. Any lines.

Ultimately films like this pose interesting moral questions. What does happen when a contractor to the State kills several guards, some of whom admittedly may have been a bit nasty, and then even more prisoners and guards wind up dead after the shootout that follows the escape? And how is it that the contractor’s father can just be released from his sentence for murder as a reward for all that killing? The US justice system can be a bewildering thing. 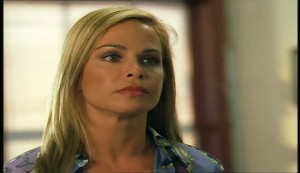 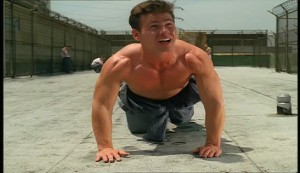