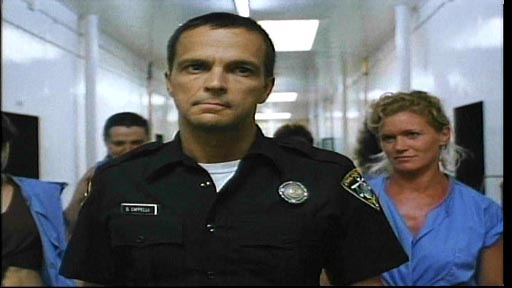 Correctional Officer Dan Cappelli (James Russo) embarks on a sexual relationship with a prisoner, then helps her escape, and is later involved in a gun fight in which she dies. “It’s strange, ” he says. “I never got to know her. Still, I will never forget her.” But then, Dan, you’ve got a memory like an elephant! Most of us struggle to remember our own names, let alone women who’ve seduced us, dragged us into lives of crime and forced us to live as fugitives!

Dan, you see, has been a man at breaking point. And it’s no wonder. We see him working in a men’s prison and in the space of 5 minutes he breaks up some nasty approaches to an effeminate prisoner, rescues another he sees hanging, and then watches on as the bloke he’s released from the noose grabs another officer whose arm he proceeds to feed into a circular saw. Realising that he made an awful mistake in not getting the suicidal inmate some professional help instead of simply ushering him into the carpentry shop, Dan gets over-exuberant in restraining the poor man, and as punishment is transferred to the women’s section of the prison. It seems it’s not the first time he has used a little too much reasonable force.

Dan has a crap life. Every day he tells himself that he must quit his job, but he doesn’t. He lives alone, his mother’s dying and a slightly wacky young woman is keen on him. So it’s little wonder, really, that within minutes of starting work in the women’s section he is chatting up one of the women, Gidell (Cynda Williams), and is soon doing some horizontal folk-dancing with her. One CO walks in on them as they’re locked in an (non-coital) embrace, and the guard whose arm was almost cut through warns him off her… but nobody takes any official action against him. It’s not until he gets into another punch-on with Gidell’s visiting boyfriend, who is deep into organised crime and for whom she is doing time, that Dan gets suspended and sent home with no pay.

Gidell rings Dan with the news that she’s pregnant to him and doesn’t want to have the baby in jail. So he tricks his way back into the prison – in his car, mind you – ostensibly to pick up his stuff, and has little trouble in grabbing Gidell and smuggling her out the gate in the back seat. I mean, who would ever look there? It’s then that the crime bosses get very nervous about whether Gidell might implicate them in all sorts of things. They track her down a bit too easily and to make sure she keeps quiet there’s lots of shooting. Dan kills one of them and Gidell is killed, too.

The reason Dan will never forget her after she’s dead, it seems, is that, “She helped me break out of a vicious cycle.” Of tension, loneliness and escalating violence, which you’ve broken out of by killing someone and living on your own as a criminal on the run, Dan. Good work. “She showed me the way out.” Yes, she did.

As a prison drama (‘inspired by a true story’) it’s bit of nonsense, really. Many of the prison scenes (purporting to be the Holmesberg Prison in Philadelphia and apparently filmed largely at the Holmesburg Prison) look good, but then you get things like Gidell openly snitching on two other women carrying drugs – for which she is assaulted in her bed with a pillow held over her head (which tends to reduce the effectiveness of the assault, one would think), and after that all the enmity is pretty well forgotten. And, of course, Dan and Gidell’s affair is tolerated. Perhaps it’s the influence of Finnish money and a Finnish director. Or perhaps this women’s prison really is different, like Dan is told when he starts there after his ‘assaults without justification’: “Listen, we walk to a different tune around here, Officer Cappelli. I mean, I believe there’s a difference between rehabbing and revenging.” It’s obviously a movie tune I don’t entirely recognise. 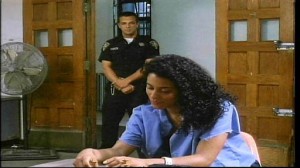 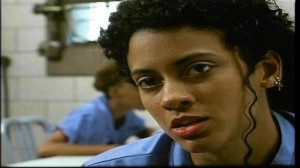