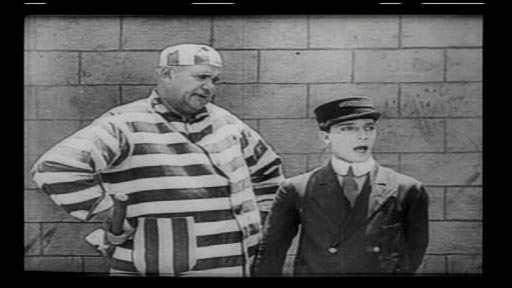 Not only is this Buster Keaton offering funnier than many more recent prison comedies (including the various Laurel and Hardy prison movies that followed soon after), it has the advantage of only having to sustain itself for 20 minutes… so there is little time for any audience to get restless.

Keaton is first seen playing golf (badly) with his socialite friends. A ricocheting ball knocks him out. At that very moment, an escaped prisoner chances upon him and switches clothes with the motionless body. Keaton regains consciousness wearing prisoner stripes and being pursued by policemen, whom he does well to evade with some masterful choreography. He finally takes refuge behind an unlocked gate, only to find that he has let himself into jail. Oops. (Security? Could improve).

Inside the nick he is recognised by one of his golf partners (Sybil Seely), who just happens to be the warden’s daughter. She thinks he’s in fancy dress. Her father thinks he’s a convict due to be hanged. Her father’s view prevails. He is led to the gallows not knowing that his golfing companion (and new love interest) has substituted gym elastic for the noose. He bounces. Temporarily reprieved, he is sent to break rocks, and then does the ol’ uniform-switchy thing with a guard whom he accidentally knocks out.

Now in guard’s garb, he inadvertently enters a yard with a massive prisoner (Joe Roberts) who has just demolished a legion of other guards. They parry. Keaton somehow manages to avoid the fate of the others. The bigger man forces his way into the warden’s office and carries off the warden’s daughter. As luck would have it, this coincides with a riot. There are casualties on both sides. Keaton manages to repel all the rioters except for his big mate, whom he quells. Then he wakes up. It was all a dream.

There are some visual treats (important in a silent movie, I know): scores of police falling into formation behind an escaping Keaton with marching coppers at each of his shoulders, the acrobatics of the prisoners and guards as they get bowled over, Keaton bouncing at the end of the hangman’s noose, and climbing on top of  the gallows to get out of reach of his burly pursuer. It’s a bit of quality slapstick, if you like that sort of thing, 1921-style. 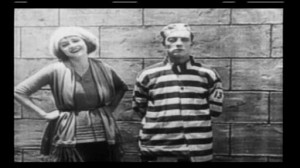 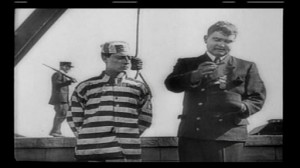