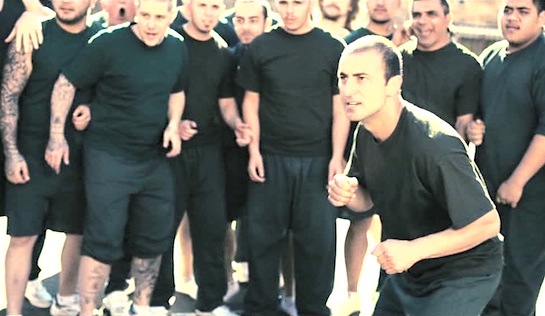 When this opened where I live, it opened, I think, for just one session in one cinema. That might say as much as needs to be said.

George Basha is Convict’s writer, co-director and leading man. He was also the stunt coordinator and quite possibly made the sandwiches for the cast.

He plays Ray Francis, an Australian-born soldier of Arabic heritage who has literally just returned from Iraq. Before he can even get out of his uniform, he locks horns with an obnoxious jerk in a Ferrari who makes a crude pass at his brand new fiancée, Kelly (Millie Rose Heywood). It’s not welcome. Ferrari Boy gets out of his car to bait Ray, and then pulls out a knife when Ray gives him and his mate a bit of a whack for their trouble. When the Ferrari Boy lunges at Ray, Soldier Man launches him head first into his fiancée’s car. Ferrari Boy bites the dust. It’s hard to see how Ray then winds up in prison. A man defending his girlfriend’s honour against an aggressor with a knife? Hardly a jury in the world would not accept a plea of self-defence, but Ray pleads guilty to manslaughter and accepts an 18-month sentence – his acknowledgment, it seems, that he had taken a life. All highly unlikely, and not unlike Con Air (1997).

What Ray doesn’t know is that Ferrari Boy’s father soon pays a visit to an old friend, prison warden Jack Morrison (David Field), leaving a suitcase full of money for him to make sure that Ray soon wishes he were dead. Morrison is not a ungenerous man and shares the bounty with three of his prison officers: the craggy Ricko (Brian Ellison), the younger Fox (Stephen Anderton) and the slightly squeamish Victor (Brendan Donoghue).

The treatment dished out to Ray is unimaginatively unpleasant. With prompting from the corrupt officers, he is confronted by the prison’s Aboriginal prisoners, by a sexually predatory giant, and later by the Middle Eastern prisoners, who don’t like that he doesn’t align himself to their crew. Ricko and Fox smack him about, set prisoners on to him, throw him in the hole. They call “Time’s up!” after just 38 seconds of his first visit with Kelly, tear up his photo of her, strip search her and show him the CCTV footage. The warden, not one to stay at arm’s length, rapes him with a baton in a scene rather too reminiscent of another Australian film, Everynight…everynight (1994). Despite the provocation, Ray continues to be full of honour, true to his own moral code, refusing to be broken… and still manages to be the white knightish protector of a young, vulnerable prisoner.

Basha is keen to make a statement about true honour and the distorted notions of honour subscribed to by ethnic gangs and communities. There is an interlude where the brutality and corruption pauses momentarily to allow a hammy debate between Ray and the other Middle Eastern prisoners about the relative merits of him fighting against Arabs in Iraq, but this is a mere distraction from the mounting number of bodies that are piling up around him. Amongst those killed is the officer Victor, who had started to voice misgivings about the level of violence visited on Ray… and so is disposed of by Ricko and Fox, his throat cut in a shower block. The deaths of neither an officer nor several prisoners seem to bring any additional attention upon the prison or its management; no Police, no external investigations, no suspects being grilled or segregated, no aggrieved family members, no searches, no security crackdowns. Murders are so commonplace, it appears, that the prison’s normal routine can continue uninterrupted.

Ray ultimately confronts the drug-dealing leader of the Middle Eastern gang, Mazen (Johnny Nasser) and all his hangers-on. And he decides to trust the prison’s one decent officer enough in an attempt to bring and end to the corruption and violence. Both acts are a little cathartic.

Sadly, Convict is derivative. It is hackneyed. It is old hat. It feeds off the violence while purporting to be concerned with nobler conceits. There are, however, a number of things which make the film more bearable: the handsome old Parramatta Gaol, where the film is set. David Field, who has played a prisoner so many times before (Everynight. everynight, Ghosts… of the Civil Dead, and Chopper, to name a few) and doesn’t stray far from type, even though he is the Warden in this one. And Ray’s one ally, an Aboriginal lifer, David (Richard Green) – a wonderfully credible (if sentimental) portrait of an old-timer who survives by managing to stay on the outside of the gangs and jail politics.

Still, this is not enough to redeem it and I wonder why George Basha thought that it was a film that needed to be made. 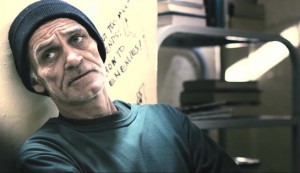 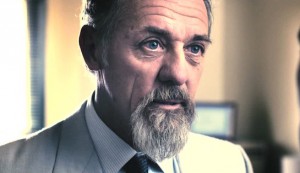