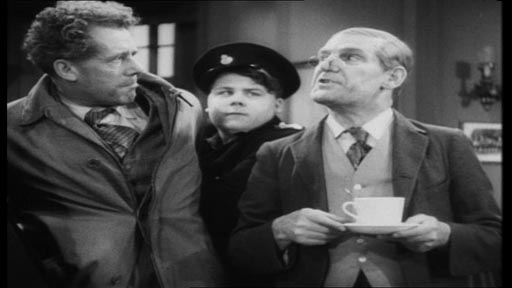 If there’s an earlier, full-length, talkie prison comedy, I haven’t heard of it. Well, Pardon Us, I suppose, and Hold ‘Em Jail, but they’re a bit like silent movies with words, in parts. And Up the River (1930), though that’s a comedy-drama. There may be fifty others; I don’t know. I do know, however, that there are plenty worse prison comedies than this one.

The inept Dr Benjamin Twist (Will Hay) has been unceremoniously ejected from his headmaster’s job, and it seems unlikely that he will soon find another. While attending an interview for another school principal’s role, however, he is mistaken for a Mr Benjamin, a very capable candidate for a prison Governor’s job, and is immediately appointed on the strength of the other man’s qualifications in running difficult Australian prisons.

He arrives at his new posting hopelessly drunk and still believing that his appointment is to a school for wayward boys. Unfortunately, he arrives at the prison just as Max Slessor, a desperate new reception, takes advantage of a minor skirmish and escapes; the incoherent Twist is believed to be Slessor and becomes Convict 99.  Twist thinks he’s been locked up for drunkenness (not for the first time, obviously), and it takes several days and Slessor’s recapture for it to be all sorted out.

Twist has no idea about running a prison, but he has endured a couple of hard days as a prisoner and immediately promises sweeping reforms, including the establishment of a Board of Management with (only) prisoner representation.  He is predictably outvoted on everything and very soon the convicts are kicking back in armchairs with drinks and cigars, the new luxuries funded by the canny short-term investment of prison funds by a prisoner with skills in share trading. Oddly, the Prison Officers don’t seem to object too greatly to these new arrangements.

But then it all threatens to fall apart. A pickpocket who was taught by Twist knows that the supposed Governor Benjamin is an imposter. At a black tie soirée for the prisoners arranged by the Board of Management, a female accomplice of Slessor blackmails Twist out of £50 (paid, naturally, out of the prison’s coffers) and then helps her beau escape. Slessor adds a couple of noughts to the cheque and soon the prison’s own cheques are bouncing. Outraged that their new lifestyle is threatened, ten prisoners are allowed out of the nick to join Twist on a mission to recover the money. They track Slessor down, retrieve the £5000, entrap a dozen Police, tie them up and steal their uniforms, and then break into the bank and return the money. All is well.

The comedy has dated significantly less than one might expect. Farce, slapstick… and a little old bloke, Jerry the Mole (Moore Marriott), who has been tunnelling for 40 years, who at one stage comes up through the carpet in the Governor’s office in a scene pinched directly from Laurel & Hardy’s The Second Hundred Years (1927). A minor revelation. 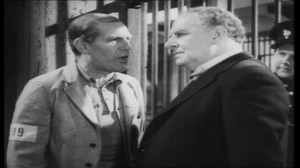 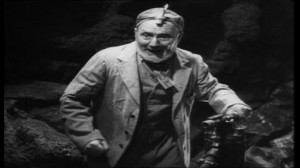