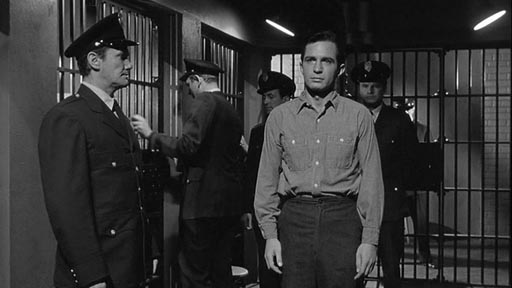 It’s hard to say why it’s called Convicts 4. The story is really about one convict, John Resko (Ben Gazarra), whom we see being prepared for the electric chair at Sing Sing, and who is then reprieved by a last-minute (well, last 17-minutes, to be truthful) phone call. He’s then transferred to Dannemora Prison (played competently by Folsom State Prison), where he encounters the simple-minded Iggy (Ray Walston, soon to become ‘My Favorite Martian’), the sharpish Wino (Sammy Davis Jr) and a crook from his old neighbourhood, Nick (Timothy Carey). The characters of Wino and Nick are so incidental to the main story, you wonder how they got caught up in the title. The illiterate Wino shares a cell with Resko and, presto!, is soon reading and quothing the King James Bible. “Hey, don’t get misled by my youth,” he says at one point. Davis was 36 at the time. Nick does little in an excellent cameo other than contrive to talk through his teeth while his lips move entirely out of sync. Oh, and he does eat an enormous slice of cake.

Anyway, we learn that Resko earned his death penalty by shooting a toy shop-owner who refused to hand over a $3.95 teddy bear Resko wanted to give his daughter for Christmas. For some reason one of his Sing Sing guards (Stuart Whitman), takes an interest in him. The guard, a Principal Keeper, has been transferred to Dannemora, too, and sees some good in young Resko. He’d shared a sip or two of melted ice cream with him on Death Row, and had a bit weirdly saved some sketches that he drew on the day he was to be executed. And then retained some additional sketches, years later. He sits on Resko’s bed. Today we might wonder if he fancied him.

But the (unnamed) Principal Keeper (let’s call him PK) is college-educated and a dynamic force for rehabilitation in a cynical system. He doesn’t like the chair. He thinks cons are ‘unbalanced’ and should be in maximum-security hospitals. He tells his warden, very much an old-school man, “When a man paints a picture or tells a story he’s revealing something about himself he doesn’t know he’s revealing. Interpreted by an expert he might become aware of his problems and change.” The warden is not entirely convinced. Mr PK proceeds to help Resko by providing useful psychological insights into his sketches. “See how restricted the form is?” he says of a picture drawn on the day Resko was to go to Old Sparky. “Rigid, compulsive straight lines.” Then: “This was the day you told me life was better than death. Notice how the lines flow free.” “Still looks kind of constricted,” suggests Resko. “Sure, but you’re on your way.”

If only more correctional officers took the time to analyse prisoners’ artwork, the world would clearly be a better place. Mr PK doesn’t lose faith in Resko, not even when he tries to escape by throwing a rope made from old socks over the wall. Or when Iggy emerges from a tunnel he and Resko had been digging, poking his head up just as PK is enjoying a cup of coffee in Resko’s cell. With PK’s encouragement, Resko becomes an artist of note. Then PK, newly promoted to warden and armed with his special insights, ignores Resko’s escape attempts and effectively secures the commutation of his sentence with a big petition of names calling for his release, including the signatures of the family of his victim. You think? So as all of Resko’s mates continue to languish in jail, the man sentenced to death walks out of the jail after 18 years – into the arms of his daughter who seems never to have visited, and her extraordinarily boofy child.

Not a great film, it’s fair to say. It’s based on the real-life story of Resko. Around Resko’s story are all these little cameos (including Rod Steiger as an uncompromising guard and Vincent Price as an art expert). It doesn’t jell. It’s stagey, and it’s hard to believe in any of the characters. But if you watch it for the unintentional humour and Carey’s Kramer-esque Nick, you might not be disappointed. 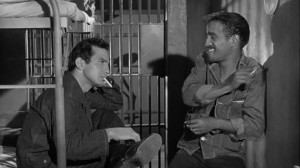 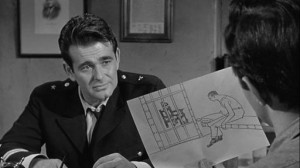