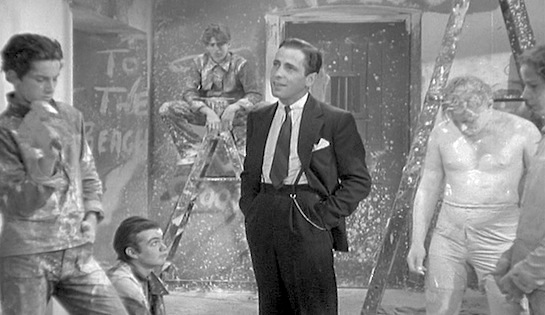 James Cagney played the role of reformist warden in the 1933 film The Mayor of Hell, of which this is a remake. Humphrey Bogart has the same role here; it clearly requires a tough guy to bring some credibility to the task of prison reform.

Bogart’s reformist challenge is Frankie Warren (Billy Halop). Frankie is a jerk. And collectively, the members of the ‘Dead End Kids’ gang, of which he is the leader, comprise an attitude of jerks; all from a poor New York neighbourhood and all with tough upbringings – parents in jail, or dead, alcoholic aunts and so on. They are cocky, guiltless and have an unshakeable (and misplaced) belief in their toughness.

The gang naturally gets up to no good, stealing items which they fence at the local pawn shop. One night Frankie thinks he’s being ripped off by Junkie the pawn shop owner, and gets into a tussle with him that Spike (Leo Gorcey) finishes when he clocks the shopkeeper over the head. The boys all flee, but are soon rounded up and put before a judge. Without the real culprit stepping forward, the judge sentences each of them to the Gatesville Reformatory for two years.

Frankie takes all of his attitude with him to prison, which doesn’t go down too well with the bloated warden, Morgan (Cy Kendall). Morgan treats the youth as hardened criminals, beats wrongdoers and gives his charges rancid food. On his first night Frankie tries to escape, and is soundly whipped by Morgan after being pulled off the barbed wire fence.

Enter Mark Braden (Bogart), the newly appointed Deputy Commissioner of Corrections, who comes the next day to inspect the Reformatory. On his first day there he sacks half the staff after finding them unfit to be in charge of children, sacks the drunken doctor and finishes by sacking Morgan. And then instals himself as warden.

Frankie continues to rebel… even when he’s not sure what he is rebelling against. He mistrusts Mark Braden, doesn’t like work or being told what to do, and has a huge chip on his shoulder. But he’s a natural leader. So why Braden and his staff would leave the gang together, rather than dividing and conquering, is anyone’s guess.

When the boys are all told off for letting the pressure in the boiler drop too low, Frankie decides to fire it up in protest… right past the point at which the gauge says ‘danger’. It duly explodes, with everyone escaping just in time except for Squirt (Bobby Jordan), who is trapped under some rubble.

Enter Deputy Commissioner Braden, again. Ignoring his own safety, he goes into the boiler-room and rescues Squirt just as the second boiler blows. “I guess I’ve been wrong about you, Mr Braden,” says a relieved and immediately-transformed Frankie. “I’ve been a heel. And I’ll work with you now if it’s OK.”

But here’s a quick test. If you’re a reformist prison warden and one of your young charges deliberately sabotages your boiler, putting lots of lives at risk and causing major damage to the prison – simply through his desire to stick it up the authorities, do you:

(a) teach him and his followers a lesson by punishing them and holding them accountable for their actions; or

(b) calmly tell him that you have no intention of taking any action against him: “I just want to you realize that your friend Squirt in there might have been killed. If he had been, you’d have been directly responsible… Now you think that over.”

Next question: Later, after quite some time when your head guard (who with the former warden is keen to discredit you because you are getting very close to exposing their corrupt activities), blackmails Spike (Leo Gorcey) to cast some doubts in Frankie’s mind as to the manner in which you are treating his sister Sue (Gale Page), of whom you have become quite fond, and Frankie leads all the gang in an escape armed with a gun provided by Spike and then bursts in on you and Sue at her home and holds the gun at you, do you:

(a) disappointedly concede that you might not have changed the boys in the manner that you had hoped after all, and hold them accountable for their actions by letting the police charge them with escape and a range of other offences; or

(b) lie to the Police to protect them, then assist them to all sneak back into the prison undetected and return to their beds so that your chief guard and the ex-warden Morgan, who have invited the press and the Police Commissioner into the reformatory in the middle of the night, look very foolish when insisting that there has been a mass escape on Braden’s watch.

Maybe you don’t need me to give you the answers. Of course everything turns out well in the end but it’s an odd moral to the story. The end justifies the means, maybe, where off-the-rails kids are concerned.

The following year Bogart, Halop and Gale (again playing Halop’s sweet sister) got together again in You Can’t Get Away with Murder (1939) for some more traditional prison ethics drama. 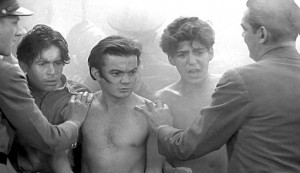 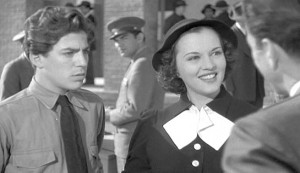