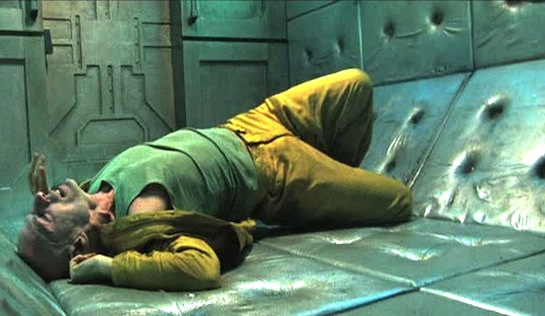 Wow. A prisoner of uncertain heritage is introduced into a crucifix-shaped spaceship and heals all with supernatural powers before fulfilling his special destiny. A little heavy on the religious symbolism, perhaps.

The Dante Psychiatric Detention Centre is a smallish space station prison orbiting a distant planet, holding just six prisoners who are looked after by two doctors and three guards (who presumably also have to keep the ship running). An expensive exercise, you would think; why not run the same operation on Earth? Anyway, the prisoners are all really, really serious offenders undergoing experimental treatment who have apparently opted out of being executed and opted into being guinea pigs.

Into this intimate little group two new characters are introduced (after being awakened from the cryogenically frozen state in which they made the trip): Elisa B (Linh Dan Pham), a confident, purposeful young psychogeneticist impatient to trial the latest in nanotechnology treatment, and a mysterious prisoner (Lambert Wilson). The prisoner had been found alone in a blood-soaked ship and somehow found himself in the mix for Dante 01. His name is unknown and initially he says nothing. He is bestowed the name Saint Georges by another inmate, Raspoutine, from a tattoo on his upper arm. Raspoutine is convinced that Saint Georges has come to save them all; to ‘slay the dragon’.

Despite the setting, and some obligatory sci-fi emblems (the prisoners all have ugly little tracking devices attached to their shaven heads, and confide only in a remote Answerer in a padded room), there is space for some more routine prison and workplace dramas.

There is a power-play between Elisa and her doctor colleague, Perséphone (Simona Maicanescu), about what experimental treatment should hold sway. “She cares more about the prisoners than the results,” says Elisa disparagingly of her rival.

César (Dominique Pinon), the leader of the prisoners, struggles to maintain control of the various disturbed personalities, but a sort of control is in place and it is only when things get really violent that the staff release anaesthetic gas to re-establish order. And when the men feel threatened or jealous or homicidal, the knives come out. How one acquires a frightening-looking knife in a small, confined, finite area remains a little baffling.

But when some of the prisoners are wracked with pain after Elisa’s DNA-bending treatment, or have their throats cut, Saint Georges steps in, his eyes glaze over and he draws upon a powerful force to restore them; they become as good as new as he gorges himself on incandescent worms, having magically extracted the nastiness like John Coffey in The Green Mile (1999). The others are wary of him and fear that he may be the Messiah, and try to kill him. But he miraculously heals himself of seemingly fatal wounds, and with that Elisa’s scientific interest in him (and her true purpose) are exposed.

What he can’t counter, however, is another prisoner, Attila, who has rather stupidly been given access to the spaceship’s computer system by the station chief, Charon (Gérald Larouche), who is rather curious to find the real reason Elisa and Saint Georges have been sent to him. Attila sets the ship on a collision path with the fiery planet Dante. In response to which César heroically volunteers to dive into boiling water, crudely wrapped in material and plastic, to punch in a code to pull the ship out of Dante’s orbit… If I ever decide to compile a ‘most excruciating’ list, that scene will be right up there.

The film is visually interesting from the murkiness of the prisoners’ quarters, to the clinical, purple shaven-headed doctors, to the dazzling blur of light and colour that accompanies the end of Saint Georges’ journey. The prison elements are more routine. And the religious metaphors are, well, a little overt. An intriguing piece, nonetheless. 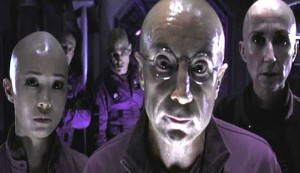 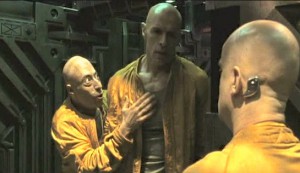