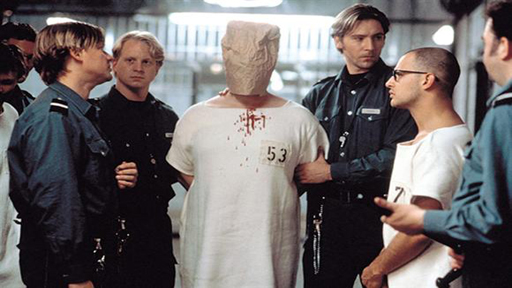 It’s hard to know whether this fits into the prison movie genre or the slightly more esoteric university research movie genre. But I’ll pretend it’s the former, because it is all about imprisonment even if the people aren’t in prison.

It’s based on the renowned Stanford University research experiment from 1971 which had to be abandoned six days into its intended 14 when the two groups of participants, one playing prisoners and other their guards – got into their roles a bit too enthusiastically. At the start, the film follows the Stanford script pretty faithfully. It also follows Tarek, a taxi driver and journalist, who becomes the chief troublemaker in the prisoner group – initially, it seems, to make his story of his experience more lively. The real life character on whom he is based had nobler (if misguided) intentions, it seems – wanting to expose the simulation’s purpose as, he suspected, finding a better way of controlling anti-authoritarian students – but he too wanted to publish his account in the underground press. The film, for dramatic reasons, one presumes, focuses on the changes to the guards; the way in which power quickly corrupts (most of) them as they pursue greater and greater control and degradation of the prisoners. It would be not so interesting in a screenplay to show the speed with which (most of) the real Stanford participants in the prisoner group became institutionalised and blindly obedient, so we see little of this. So the film takes a different path to the real experiment, setting up bigger and bigger abuses and invents some desperate and heroic acts to overcome them. One wonders why. The psychological impact of the Stanford experiment was so significant that several people had to bail out within just a couple of days, and others were seeking to be released when it was called off. The film’s finale leaves three people dead and has one of the female researchers taken captive, stripped and having to fight off an attempt to rape her.

In the end, the over-the-top violence says a lot about the filmmakers’ lack of confidence in an audience being able to appreciate harm without seeing bullet holes and dead bodies, or being able to appreciate courage without seeing Die Hard-type heroes.  It’s a shame, because there are some exceptionally strong performances from the main protagonists, and the psychological warfare (the taunts, the belittlement, the reprisals) is unpleasant enough without the accompanying bloodiness. Meanwhile, the critical questions about why prisons are like they are, and why it took just six days to turn normal people into something else, are lost a bit in the hunt for a traditional dramatic conclusion.