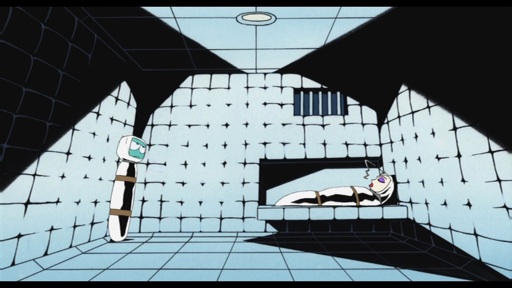 This is 50 minutes of frenetic, visually aggressive Japanese anime. Pandy and Retro, looking not unlike a couple of sexed-up characters from Futurama, find themselves naked on Earth with no memory of the past eight years. Pandy is a shapely young woman with a pink patch over one eye; Retro has a TV screen for a head.

They commit an armed robbery, hijack a car and then shoot at the pursuing Police, an escapade which gets them sent to the Dead Leaves penitentiary on the moon… or what’s left of the moon. There all the inmates are bound in straight-jacket-type arrangements and are transported around the prison like carcasses at an abattoir. They are then forcibly fed, abluted and set to work. The other prisoners, well and truly institutionalised, assure our heroes that they’ll get used to these various violations of their persons.

Back in their cell at the end of the day, Pandy and Retro engage in sexual activity of such passion and skill (given that their cocoons have only one outlet hole at the rear) that it not only frees them from their bondage, but somehow frees all the other genetically modified inmates as well. In celebration, everyone charges through the prison, looking to escape. Luckily, Pandy and Retro seem to have the happy knack of being able to gain access to an unlimited supply of weaponry, so the whole story is awash with bullets and blood and things blowing up. It’s an anarchic assault on the senses, fortunately dubbed into English so you don’t have to read what’s being said as you try to make sense of the explosions of noise, colour and furious animation.

Does it have anything serious to say about the prison experience? Or anything that’s not so serious? Maybe. You could, if you wished, make much of the way the film depicts the dehumanising nature of prison, the robbing of inmates’ individuality and capacity to make choices (even to the extent of formalising the extraction of body waste as part of the daily routine). Just look at the waves of clone-like, expressionless Police and Prison Officers, devoid of personality and who seem to have no function other than to shoot at the protagonists.

Oh, and then there is this metamorphosis theme that is woven oddly throughout; that’s positively dripping with significance. Perhaps one should not ignore its prophesy of mixed sex prison cells, either, though I can’t really see it in my lifetime.