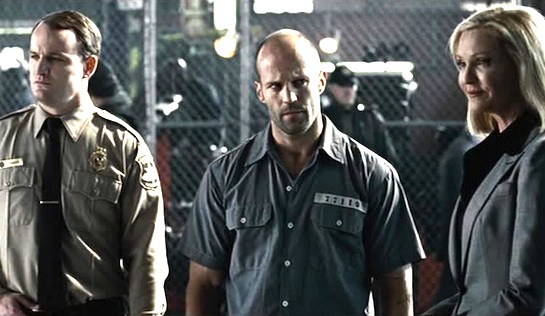 I don’t know what possessed me to watch this movie. Made in 2008, it is set years into the future (2012), at a time when the US economy has collapsed, all prisons are run for profit and cage fights in prison have become so passé that they are no longer guaranteed to make money.  With just a handful of days to go in 2012, I may well have been curious to see just what advances in correctional management I had missed.

The film revolves around Jensen Ames (Jason Statham). He has had quite a bad day. The steelmill where he works closes, the Police are called in to quell a riot amongst the workers that isn’t happening, and after he gets home to the wife he adores, she is killed by a masked intruder and he is then framed for her murder. And he has no time to work on his abs.

Six months later he finds himself at the Terminal Island Penitentiary, presided over by Warden Hennessey (Joan Allen). Hennessey knows of his background as a race driver and ‘invites’ him to take part in a death race – where selected prisoners drive heavily armed and heavily armoured cars, and try to (a) kill each other, and (b) win the race – in front of a massive audience of TV subscribers. It is of course heartening to know that even in times of economic disaster, between 40 and 70 million viewers will part with good money to watch convicted criminals kill each other. Hennessey asks Ames to replace the popular Frankenstein, a four-time winner who has died of injuries sustained in his last race. As ‘Frank’ wore a mask, Hennessey figures that no-one will notice the difference… and as she has guaranteed the release of any prisoner who wins five times, Ames has only to win the three-day event once to secure his freedom. He agrees.

He is introduced to his support team and, at the last moment, his navigator – a beautiful female prisoner, Case (Natalie Matinez), who once sat alongside the old Frank. Ames soon works out that he has been specially recruited by Hennessey, and that another driver, Pachenko, killed his wife – obviously acting on Hennessey’s orders. This knowledge doesn’t seem to make him any happier. He restrains himself from killing the Warden because he wants to get out to be reunited with his baby daughter, but he soon also realises that it’s not in the Warden’s interests to let any prisoner win five times.

The races are really no-holds-barred. There are two elimination rounds, in every sense of those words. Gunfights, napalm fights, unfair handicapping, explosions, sabotage, huge crashes… but there is no tension as one kinda knows that Ames is going to make it to the last two. When he conspires with the other driver, Machine Gun Joe, to both beat the system and escape in the final race, there is similarly no tension as the conclusion is kinda foregone.

My dislike of action flicks is well documented, but this one is perhaps better than most. And it features some good (albeit brief) old-fashioned prison scenes to supplement the fantasy car races: a tense confrontation in the mess room, a traditional walk-through the exercise yard, a very nasty Warden and an equally nasty sidekick, and enough heavily-tattooed extras to give it some prison cred. Plus some really interesting, innovative ideas about how to generate an income in these times of dwindling resources. 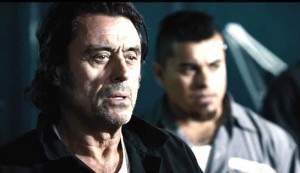 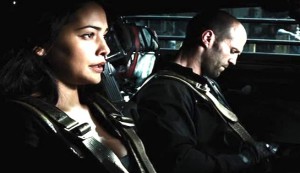