In 2006 California reached its peak prisoner population (the first three sources I looked at variously put the figure at 163,000, 170,000 and 175,000). Odd time, then, to be leaving prisons unoccupied, but this film, made that year, features an abandoned, newish – and indeed spotless – prison… into which eight medium security prisoners from San Quentin are transferred to do some community work. They are to be supervised by four guards.

The slight problem is that a vengeful unnamed man (let’s call him La Rosa, because that’s what he seems to answer to at one point) gets there first. La Rosa (Elias Castillo) chloroforms a rookie guard, Evans, kills him, puts on his uniform and assumes his identity. Then, for the remainder of the film, he successively lures all of the prisoners and all of the guards into different parts of the empty prison and chloroforms them, stabs them, cuts their throats or shoots them (or a combination of all of the above). There’s not a huge amount of tension because no-one twigs that he is not who he claims to be, or believes anything other than that one of the eight prisoners, Graves, has gone berserk and is systematically knocking everyone off.

La Rosa, it transpires, was bullied by prisoners and guards alike when he was a dorky new fish at San Quentin five years earlier; raped, beaten, extorted, humiliated. He knows one of the eight, Carl Thornton (Joe Estevez), (“I asked for your help, remember?”), but how he knew that Thornton and the others were going to turn up at the prison, (and how he managed to break into it) remain mysteries – possibly the biggest thriller elements of the movie.

There are plenty of correctional bloopers to keep one entertained [my favourites: Evans being asked to do a ’round’ of the empty, unused prison, and checking all the toilet cubicles (for what, exactly?); the multitude of unlocked doors (never a great look in a prison); and another guard shooting his handgun into the ceiling to bring bickering prisoners to order]… quite aside from other bits of unintended humour, such as one prisoner stabbing another in the hand with a plastic knife over a food dispute (and the issue ending there), Thornton very furtively removing a paper clip from his shoe while in a cell with nobody in a position to watch him, and the guards barking orders and calling the inmates ‘scumbags’ – having seemingly forgotten that they are dealing with eight prisoners on a work detail.

But the acting is an improvement on many similar ventures (Castillo, in particular, is at times excellent), and at least the prison looks like a prison. That’s a start! 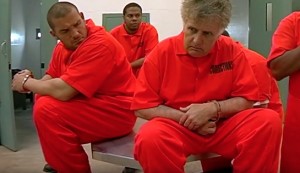 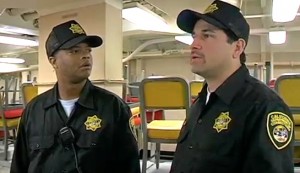 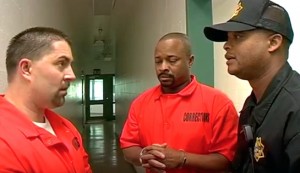 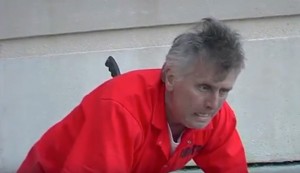