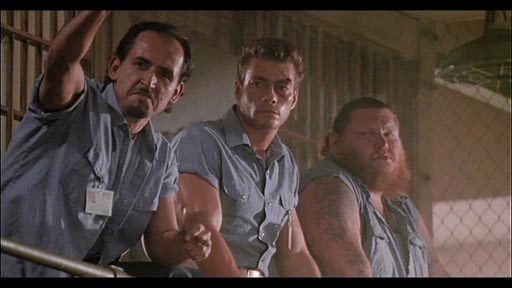 I think it’s good to learn something new every day. I’ve just watched Death Warrant and I now know how to work as an undercover cop in a tough prison environment. First, use your own name. Fake names are apparently for wusses. Second, as soon as you’re inside, start asking lots of nosy questions; that won’t draw any attention to you, ever. Third, get your partner who is pretending to be your wife to do most of the background checking after you’re inside, so she can give you the low-down in the open, public visits area. Spontaneity is fun and so much more effective than preparation. Lastly, if it’s urgent, use your cell phone. Easy.

Jean-Claude Van Damme plays Detective Lou Bourke, a Canadian mountie who’s in LA tracking down the sicko (known as ‘The Sandman’) who killed his partner. Now, I haven’t seen Heath Ledger’s Joker but I suspect that The Sandman (Patrick Kilpatrick) might have a similar vibe.  Bourke finds him and empties his gun into him.

Sixteen months later and Bourke is approached by the Attorney-General in LA to go undercover in Harrison Penitentiary. An Assistant Warden and nine prisoners have been suspiciously murdered and they’re beginning to worry about it politically. Bourke agrees to take on the assignment, partly, it seems, because it’s proposed that a law graduate named Amanda (Cynthia Gibb) will act as his wife and be his link to the outside. Frankly, if I had JCVD’s body, I’d expect to do better.

Inside, Bourke takes an immediate liking to an older African American prisoner, Hawkins (Robert Guillaume), even before Hawkins gives him a special shirt which shows off his muscles, rather than a standard issue shirt.  It seems an unrequited fondness; he is promptly counselled to keep to his own racial group. Several prisoners try to let him know who’s boss, and Bourke predictably dispatches them with ease.

It’s not long before he discovers that the prisoners are being knocked off to sell their organs on the black market, and that the guards and certain prisoners are in cahoots. Worse, his name is next on their hit list because he has a rare blood type. He naturally thwarts their attempt to kill him. Meanwhile, Amanda is rallying the troops and discovering that the Attorney-General is in on the whole deal, having kicked it off with a cut-price liver transplant for his wife. But it gets even sillier…

Bourke is getting so close to tying off the loose ends he can taste it, but who should come into the prison, but… The Sandman. He may have come back from the dead; who knows? The whole prison erupts into reverential applause when he is led into the cell-block; the sort of welcome admittedly you’d expect for any crazed serial killer. It seems that the corrupt guards have had him transferred in to deal with Bourke, but surely there are easier ways, like shooting him. The Sandman not only is out for revenge, but is the only one who can expose the Québécois Bourke as a cop. He does. It’s no longer just The Sandman who wants to get even with Bourke.

It must be said that the prison design is not one I’m familiar with. It has a multi-tier cell-block (those I’m familiar with) and then, beside it, an even taller plant room with lots of tiered viewing platforms. It also has a comfy dungeon which a prisoner inhabits with his transsexual harem. The multi-storey tower thing is also something of a workshop, with circular saws and tools and stuff just lying around, and a furnace. Luckily, it makes a perfect backdrop for the showdown between Bourke and The Sandman, with the entire prison able to watch on.

The Sandman is awfully unlucky. He wears one of the guard’s jackets, but I don’t know if that brings him bad luck. Hawkins and the harem man decide to help the undercover cop out; two prisoners helping a cop must be very unlucky. Then the huge wrench with which Mr Sandman hits Bourke many times on the legs and other places is obviously made of an inferior metal as it seems incapable of breaking any bones. Extremely unlucky. But he does also make some bad calls… should I kill him now that he’s at my mercy, or should I let him go and tease him a little more? Still, to give him his due, he’s one tough dude; even after Bourke kicks him into the furnace The (now crispy) Sandman is good enough to come back for one final encounter.

Have I said before that I dislike action movies? This one is particularly stupid. 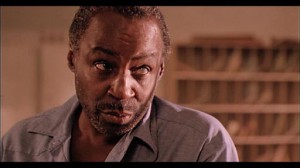 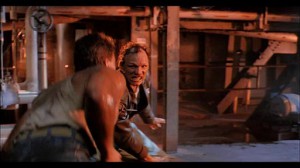