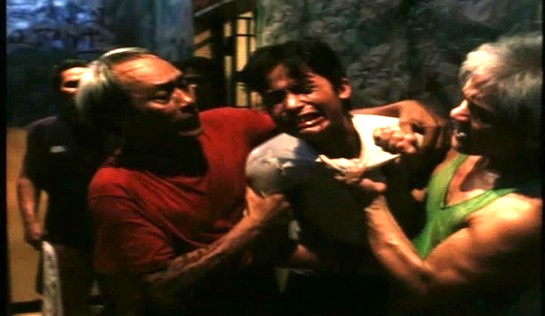 This is a heartwarming tale – full of stabbings, rape, murder, drug dealing, slash-ups, suicide and corruption. But heartwarming nonetheless.

Sonny Corpuz (Cogio Domingo) is just 16. He goes along with a few of his mates to ‘collect a debt’ from an elderly woman, who is not about to tell them where her money is hidden. Sonny is uneasy about the gun brandished by one of his friends, Celso, and even less happy when Celso shoots the woman dead as the police arrive. Sonny can’t convince the court (a) that he’s not 18, and (b) that he didn’t shoot the woman; he is (c) sentenced to death.

Death row in the Manila jail into which he is placed is on the chaotic side – prisoners all over the place, the screams of the mentally ill, beatings, drug deals and alcohol brought in under the noses of the guards; even prisoners with night terrors. In an initiative that clearly keeps staffing costs at a minimum, the jail is effectively run by the inmates; of whom there is a ‘Governor’, a cell chief, and an appropriate complement of staff. Sonny is given the new arrival speech that is a feature of so many prison movies, but this one is delivered by a prisoner marshal; in any event, there are just two rules – first, respect the authorities, and most of all, respect the employees (the prison guards).

The travails of a 16-year-old in a jail full of hardened criminals are pretty predictable. He is shown kindness by some who wish to help him and many more who wish to do him harm. He is tested, used to sell drugs and raped. He is an orphan, with no family support. His girlfriend’s mother stops her from continuing to visit him. He is very much on his own.

Except that in steps Lolo (‘Grandad’ in Tagalog) Sinat (Eddie Garcia), a 77-year-old former hit-man who has spent 35 years in jail and the last 20 on death row. His one love, Ruby, was killed in crossfire decades ago, and he has spent his whole life being tough and believing that “love is a sign of weakness… I wanted to be strong”. Yet as his execution date approaches he resolves that when he dies he would “like to tell God, just once, that I did a little kindness” and so sets out to protect Sonny and have him exonerated.

Lolo Sinat is helped by Gina (Jaclyn Jose), an alcoholic lawyer who has never won a case, but who is committed to trying to get men off death row. Sinat makes it clear that he doesn’t want Gina’s help, but he doesn’t mind her helping the kid. Then he takes matters into his own hands and engineers an escape for them both; albeit a very short-lived one. The consequences of an escape are perhaps not so great for two men already on Death Row.

Against this gritty backdrop of a jail full of power plays, scheming and violence, we ultimately are treated to three unashamedly sentimental stories of found humanity, redemption and vindication. Sinat puts a lifetime of emotional closed-offness behind him before he is executed, and does some good. Gina finally has some success, repaying the unwarranted faith placed in her. And the innocent Sonny goes free.

I have no idea whether Deathrow accurately represents the real Filipino jail experience, but it seems as though it might. The mayhem – the noise, the crowdedness, the power divide between the wealthy and poor prisoners, the guards who seem to be in control only when they enter the fray with pistols drawn and assault rifles at the ready – is entrancing, and the story of an old lag taking a young prisoner under his wing is enchanting. Not even the annoying flashbacks in which the contemporary characters are inserted in the action from years before can ruin the story. 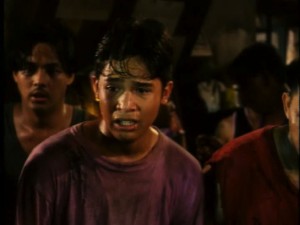 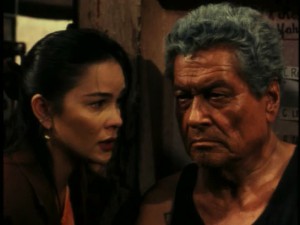 Thanks to Kathrina from the Philippines for bringing this to my attention.