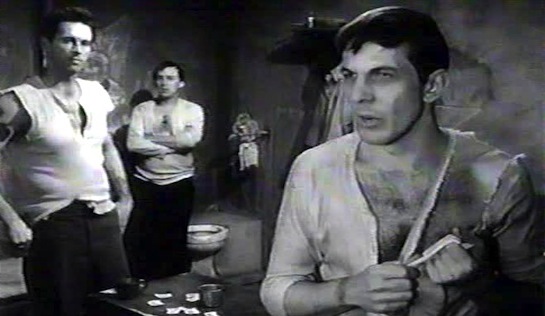 In Un Chant D’Amour (1950) the writer Jean Genet explored imprisoned men’s longing for intimacy. In his play Haute surveillance, published in 1949 and later made into this Vic Morrow film, he allowed his characters physical contact, but their longing remains unfulfilled.

Two prisoners in a shared cell vie for the exclusive attention of a third, a murderer, Greeneyes (Michael Forest). Greeneyes has been sentenced to death, and given that we see another prisoner swiftly guillotined for slapping a guard’s face, it seems that his execution might not be far off. He is strong, muscular, tattooed and illiterate. In the manner of many prison hierarchies, he and a black prisoner, Snowball (another condemned man whom we see only fleetingly), are the ‘kings’ of the prison, yet there is nothing tough or heroic about Greeneyes’ crime; he strangled a woman.

Greeneyes’ cellmates are jewel robber Jules Lefranc (a pre-Spock Leonard Nimoy), and Maurice (Paul Mazursky), a camp homosexual. Both seek Greeneyes’ favour. Jules aspires to match Greeneyes’ status, and idolises him with a quiet desperation, going so far as to engineer his placement in Greeneyes’ cell. Maurice simply lusts after him.

They play a three-cornered game; Jules and Maurice attempting to ingratiate themselves by taunting and deriding the other, Greeneyes revelling in his share of the true convict’s curse of misfortune, but the game often eludes him. The game reaches a climax when Maurice exposes a tattoo that Jules has drawn on himself and mocks him as a ‘phony’. Humiliated, Jules strangles him. “More than anything, I wanted us to be brothers,” he tells Greeneyes, who is disgusted by the lack of challenge in the killing, but doesn’t intervene. “I wanted to become what you are… I wanted to shine, to take your place,” he whimpers. He ends very much alone.

As one might expect, the film is stagey, but the dialogue and cast are excellent.  Genet’s long history as a prisoner himself lends the script authenticity, but there is also a detachment in his touch that prevents it from being a really good film. 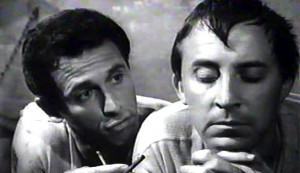 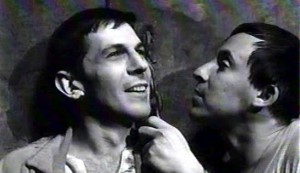 Thanks to Melian for watching out for this one.