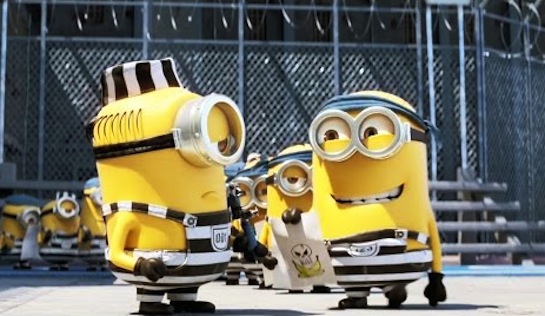 You got me. This is filler. There is really no reason to include this film… Except that I saw the rushes which inferred, I thought, that much of the film was devoted to the minions in prison. It turns out that the prison scenes account for just on three minutes. They manage to pack a fair bit into those three minutes, but it’s three minutes.What’s more, I have to admit that I enjoyed the first two Despicable Me movies more than this third offering… despite the earlier ones failing to include any prison scenes whatsoever.

In this one, former villain Gru gets sacked from the Anti-Villain League but finds a diversion from his sudden lack of purpose in his discovery that he has a twin brother, Dru. Dru is enormously wealthy as a result of his father’s extravagant misdeeds, and is keen to entice Gru back into the villainy fold.

The minions, meanwhile, grow impatient with Gru’s new law-abidingness and set out on their own. Hungry and weary, they follow a pizza delivery boy into a TV studio, and after a rousing performance as contestants on the show ‘Sing’, all get arrested (for trespass, possibly), and thrown in the State Prison. Their sheer magnitude (there are more the  200 of them) has the hardened prisoners keeping out of the way, pleading to be allowed to use the showers, paying them protection money, and acting as spotters on the weights benches.

But one of the minions, Mel, reflects on all the good that Dru has done for him and they all set about making an elaborate hot-air balloony thing in which they nearly all escape and head off to assist Gru in his battle with a nasty ’80s disco villain, Balthazar Bratt.

If nothing else, the film serves as an argument for the relaxation of bail laws in the US.