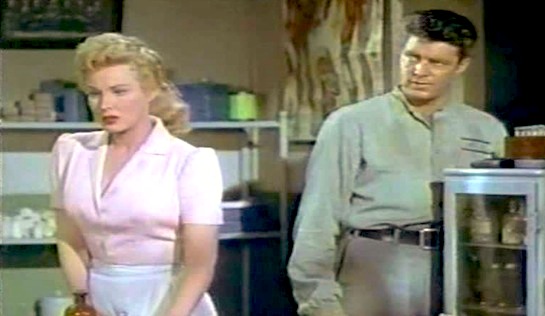 The crossover between westerns and prison movies is not a common one; Hellgate (1952) and There was a Crooked Man… (1970) being the only other examples I can readily bring to mind. Even in this film, once the scene-setting shootout between men in ten-gallon hats is dispensed with very early in the piece, it settles down into a standard prison movie. Well, as standard as you can get where there is one female prisoner in an all-male jail.

The story is set in Arizona Territory, 1897. Ex-marshal Billy Reynolds (Dale Robertson) is warned by the beautiful Abby Nixon (Virginia Mayo) that brothers Bud and Cole Gorman are in town and out to kill him. It’s not clear why she gives him the tip; she says it’s because he could have shot her once and didn’t… and she doesn’t want to be beholden to him. But she’s also one of the Gorman gang, being Jesse Gorman’s gal. Billy thinks it might be a trap.

Nonetheless, he takes heed and gets some guns… and duly manages to shoot the brothers before they shoot him. But things are changing in the west; interfering easterners are trying to stop gunslinging and Billy is charged over the two deaths, and gets 10 years in jail. Not everyone is happy with that; least of all Billy.

The Territorial Prison of Arizona to which he’s sent is set on some very flat land near Yuma. It holds 500 men, including Jesse Gorman (Stephen McNally), out to avenge the death of his brothers, and its guards include Captain Jack Wells (Jay C Flippen), whom Billy punched on the chin for maltreating a prisoner way back when he was an upright lawman. The prison is known as Devil’s Canyon for reasons that are never clear.

Soon after Billy’s arrival, Abby also lands on the prison’s doorstep, sentenced to 2 years for her part in an armed robbery. She is the only woman in the prison, and they allow her to bed down in the hospital and assist the prison doctor. She is soon asked to attend to both Billy and Jesse, who have been involved in a mess room fight… started when Jesse throws a knife at Billy, wounding him in the arm. Jesse doesn’t play the percentages well.

Abby is keen not to hang around in jail. She bribes a guard for some time alone with Jesse, and tells him of an escape plan involving smuggled guns, waiting horses and a life in Mexico. Jesse is interested in the escape, but not on being told what do by a woman, no matter how beautiful and sassy she is. “I do the thinking,” he tells her. He plants knives and other escape items in Billy’s cell, and gets him thrown into the hole, where it is hotter than the 130° it is in the ordinary cells. Abby asks Billy to join them on the escape, and it’s not clear whether she is setting him up or whether she is secretly in love with him.

The guns arrive, fortuitously hidden in medical supplies, to which Abby has access. The men are all confined to their cells, Warden Steve Morgan (Robert Keith) refusing to feed them or let them out until someone comes clean over the rumoured escape. With prisoners wilting and needing medical attention, Jesse and his men seize the moment. They take guards hostage and overpower the tower guard to prevent him from using the Gatling gun on them. But Jesse is in no hurry. He savours the Warden’s cigars, and resists Abby’s and others’ urgings to clear out fast – planning instead to release all the prisoners into Yuma as a smokescreen for their escape, and to blow up the entire prison before he leaves.

Abby calls on Billy to help. She releases him from the pokey, tells him that Jesse has gone crazy and gives him her gun. But Jesse has one additional job in mind; he finds Abby and takes her to the pokey so that she can watch him finally exact his revenge on Billy. When he finds him gone, he realises that he has been double-crossed; that it was Abby who had released him, and Abby who had forewarned him about the Gorman brothers hunting him down.

Billy by this time has made it to the the base of the tower and shoots the two prisoners guarding the Gatling. Jesse returns fire, injuring Billy in the shoulder, and then launches some dynamite at the gate, blowing it wide open. But with his one good arm Billy manages to use the Gatling gun to kill Jesse and to keep all of the other prisoners, who have just been released from their cells, at bay – ordering them to return to their cells… just as Warden Morgan and others manage to grab some rifles and get free. Order is restored.

Abby and Billy fall into each other’s arms; all the sexual tension thankfully released. Billy apologises to the Warden for the gate. “The Governor will give me a new gate. Maybe I can persuade him to give me a couple of pardons, too,” says the Warden – rather generously given that Abby had conspired to get the guns into the prison in the first place, irrespective of her actions in the last few minutes. 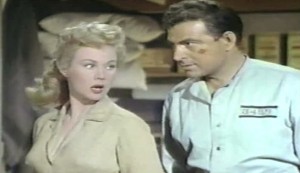 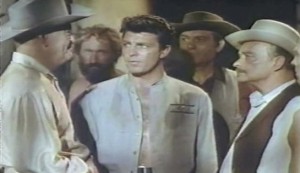