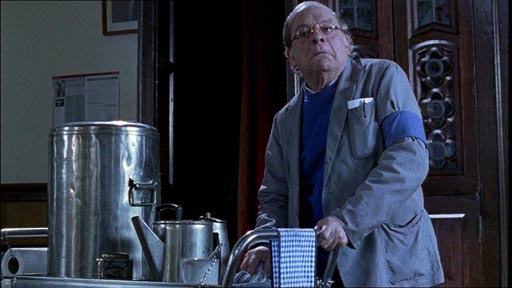 There are echoes of all sorts of other movies in Diamond Geezer (known as Rough Diamond in Australia). The plot (master criminal seeks perfect alibi by escaping from prison, committing a huge robbery and then returning to prison before anyone notices that he’s been gone) is very reminiscent of Two Way Stretch (1960). The main character, Des (David Jason), seems to borrow some features from ‘Blanco’ Webb, the elderly prisoner Sir David played in the Porridge TV series. And the prison’s top dog, Mr Fellows (Gary Whelan), carries on a fine British film tradition [The Italian Job (1960), and Porridge (1979) for starters] of crime lords ruling the prison from their prison cells, not always in a gentlemanly manner. It’s all very comfortably familiar.

But it’s Des’s show and a vehicle for David Jason to demonstrate all his stuff. Des walks with a limp and stutters. At 65 he is clearly a broken man and has no status beyond being a tea-boy. He is virtually invisible to everyone as he pushes his tea trolley around the prison; trusted and dismissed by staff and prisoners alike.

Enter Phil (Stephen Wight), a thoroughly unlikable young man doing his first jail term for petty crime; too cocky and not smart enough to know his true place in the criminal hierarchy. Des saves him from utter humiliation and for his troubles is asked to look after the young kid; Phil is moved into Des’s cell. It’s not what Des wants. He is forced to reveal that his dim-witted, servile character is nothing more than a clever scam. He’s been plotting the perfect diamond-heist and now he feels obliged to let Phil in on it, which is risky.

From there it’s on old-fashioned escape thriller. Meticulous planning, disguises, and a plot which relies on a detailed understanding of prison officers’ habits and routines. And then the perfect crime and return to prison, which are exploited for their comedic potential as they don’t go exactly to plan. And there are a few decent sub-plots thrown in for good measure.

It’s not a bad prison movie at all, even if it were made principally as a pilot for the Diamond Geezer TV series. Filmed at the reassuringly old-school Lincoln Gaol, the prison is full of characters – the boxing, toupee-wearing Mr Fellows and his collection of hangers-on, the nasty lout who bravely bullies the feeble Des, the full suite of prisoner and officer stereotypes… and the not-to-be-messed-with Des. Very British and comfy as. 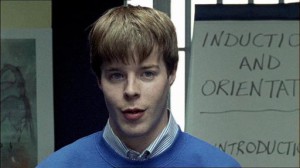 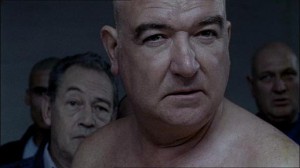 Thanks to MB and IS for alerting me to this one.