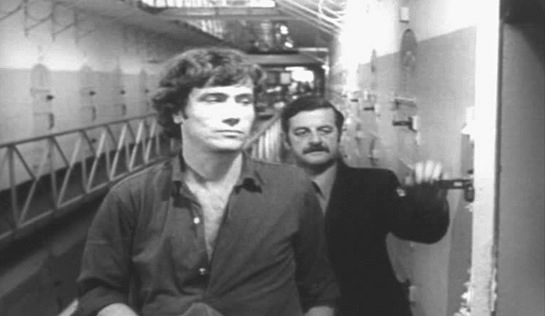 Based on the book by Swiss Alexander Ziegler, who as a 22-year-old was sent to prison for a gay relationship with a 16-year-old, this is a not-so-simple love story that battles its way through prison, a reformatory for juveniles, and considerable torment. Although it is a German production, almost all of the action takes place in Switzerland.

At its centre is Martin Kurath (Jürgen Prochnow), a well-known actor in his mid-thirties who is imprisoned for having an affair with a 15-year-old boy. While there he agrees to take part in a play written by a fellow inmate. It’s still not clear to me why, but one of his fellow cast members is a schoolboy, Thomas (Ernst Hannawald), the son of one of the prison guards, Giorgio Manzoni (Walo Lüönd); perhaps schoolboy-prisoner theatrical co-productions were then common in Switzerland.

Thomas develops a crush on Martin, showing his love by first smuggling a bottle of whisky into him, and then, on the production’s final night, slipping unnoticed into his cell before he is locked away. One does have to ask serious questions about the prison’s security at this point. Thomas, who is only 15 or 16 himself, seduces the older man and then slips out, again unnoticed, in the morning.

From that point, Martin is similarly smitten. Their love letters are, predictably enough, discovered and lead to Martin being labelled as ‘incorrigible’ and forfeiting his chance at being released earlier than his full term. When he is released the couple live together idyllically (though not exactly with Thomas’s parents’ blessing)… until, on the petition of his father, Thomas – who would be around 18 by this time – is sentenced to time in a reformatory in Dürrenmoos on the grounds of physical and mental neglect (a not-too-creative euphemism for living in a homosexual relationship with an older man).

Thomas struggles in the reform school. He objects to being there, objects to having to choose where to work, and objects to the bullying ‘educator’, Diethelm (Werbner Hannawald). He objects also to being dragged down to Babette, an intellectually disabled girl who is willing to provide sexual favours for all the boys, to cure him of his homosexuality. He escapes, only to be brought back and placed in ‘Group C’ – the punishment section.

It’s there that he’s found by Martin, who has arranged forged documents proclaiming him to be Mr Gürtler, a psychologist, in order to secure work at the school. His posting lasts only until he challenges Diethelm, in front of all the boys, about stubbing his cigarette on Thomas’s back. But as a departing gesture he arranges for Thomas to escape again, this time fleeing with him to Germany where he leaves him in the care of an older benefactor, who arranges German citizenship for him in return for boyfriend’s benefits.. and then kicks him out when Thomas refuses to keep having sex with him. On his own, Thomas descends further – into prostitution and despair – before voluntarily returning to Dürrenmoos to serve out his sentence.

In time, at 21, Thomas is finally released and Martin is again waiting for him, but he is too damaged for them to simply pick up where they left off. He attempts suicide, and is then admitted to a psychiatric ward from where, at the film’s conclusion, he has gone missing.

Shot in grim black and white, the film remains, it seems, a significant one in the history of gay cinema. It holds not quite such a salient position within the prison movie genre, but it does feature an intruiging, surprisingly lax Swiss jail (even though Thomas lived in a house on prison property, the ease with which he was able to sneak in and out of the prison remains more than a little vexing), and a less surprising, non-reforming reform school which provides no education for its boys, condones them taking advantage of a sexually disinhibited disabled girl, and celebrates the failure of its graduates as corroboration of their lack of worth.

Survival under those conditions is tough; survival of any romantic attachment through it all may be nigh impossible. But how much sympathy you have for the two lovers, and the degree to which you view their forced separation as tragic, may depend on how comfortable you are with one of them being just 15 or so and the other 20-odd years older when their relationship starts.